A Brahminy kite in flight. A hatchling from the protected species was sold through the social media tool WhatsApp. Photo Credit: Wikimedia Commons

How easy is it to buy endangered species in Malaysia? Very. Not least because unscrupulous operators have taken to social media to peddle protected species. Officials have promised to crack down on the practice, and the Department of Wildlife and National Parks (Perhilitan) has set up a special unit to investigate illicit sales conducted online. However, the ubiquity of social media and the near-impossibility of policing the medium effectively will make enforcement a daunting challenge.

Here comes the proof: A reporter for The Star newspaper decided to try and buy a protected Brahminy kite on social media and succeeded in doing so after exchanging just a few messages on the messaging app WhatsApp. The young kite (Haliastur indus), known locally as “lang merah,” cost only RM600 and the hatchling was hand-delivered by a woman to a designated hair salon inside a shopping mall in the city of Klang in Selangor state. Officials had been notified of the impending sale, and the middle-aged woman was briefly detained before being let off with a warning. Apparently, the local woman had been hired simply to serve as an intermediary for the actual wildlife trafficker, who remains at large. 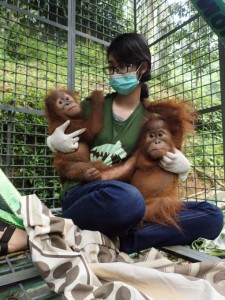 A Malaysian vet checks on two young orangutans from Indonesia after the primates were rescued from wildlife traffickers who had smuggled them into the country, where they sought to sell them online. Photo Credit: SOCP

Complicating the task of law enforcement officials is the fact that often it’s not only professional syndicates that are selling endangered species online. Otherwise law-abiding citizens might, too, decide to try and make a fast buck by engaging in the sale of protected species, either as accomplices or as direct sellers. “There are groups on our radar but it takes time to research and build a profile as usually it’s a network of people involved in the trade,” Perhilitan’s deputy director-general Abdul Kadir Abu Hashim explained. “From the main poachers to resellers and runners, they can be family members and close friends.” To avoid detection, traffickers routinely resort to code words: “black” for rhino horn, “red” for a hornbill, “white plastic” for ivory.

Wildlife traffickers often set out to find new customers on social media by acting surreptitiously. Pretending to be animal lovers, they set up innocuous-looking groups on messaging platforms like WhatsApp ostensibly to find likeminded people interested in wildlife. “In reality,” however, an anonymous insider was quoted by the newspaper as saying, “these groups are formed with the aim of generating market interest for protected species such as slow lorises, Asian leopard cats and even baby tapirs.”

Last July four men were arrested for offering two young orangutans for sale as pets in just such a social media group. The two primates had been smuggled into the country, inside a suitcase, from Indonesia. They were later returned to their homes in the forests of Indonesia. “The public are advised not to engage in purchasing or selling illegally traded wildlife,” Abdul Kadir said.

Here’s the thing, though: just as the free-for-all of the social media environment allows for such blatant trafficking, it also enables animal lovers to keep an eye on unscrupulous traffickers. The old adage applies: “If you see something, say something” … to Perhilitan authorities, that is. Let traffickers go fly a kite.