Durian Farmers Will March on Parliament in Protest at Bauxite Fiasco 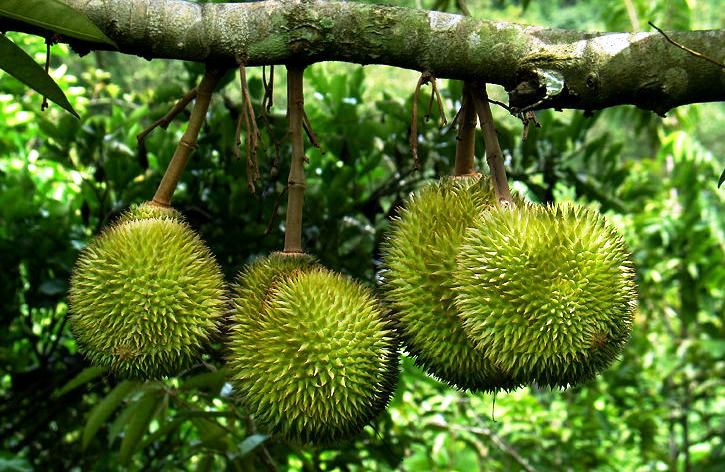 Durian crops in Kuantan have been failing in the wake of the bauxite mining disaster. Photo Credit: Wikimedia Commons

Durian farmers in Pahang have had enough. Local growers of the “king of fruits” are planning to embark on a two-week-long march next month by foot all the way to Putrajaya in a show of protest at what they see as the government’s mishandling of the bauxite mining disaster. With plenty of soil and local fresh water sources having been badly polluted from toxic runoff, they say, large swathes of arable land in the state have become unusable for plant cultivation.

“My durian trees didn’t fruit last year. Our rivers and the air we breathe are polluted. People have fallen sick,” one durian farmer, Che Long Che Ali, was quoted as saying. “We will march to submit a memorandum to Parliament,” Che Long noted. “I’m doing this for myself and all future generations to fight for our environment.” The incensed farmers want to see far stricter regulations imposed on local mine operators to ensure that there won’t be a repeat of the massive pollution that resulted from unregulated mining practices last year.

Leading environmentalists have warned that heavy metals have contaminated local fresh water sources, potentially endangering the lives of people and animals for years to come. It might take decades for the local environment to fully recover from the extensive harm done to it within the space of just a year in a helter-skelter mining frenzy by fly-by-night operators eager to meet the insatiable demands of the Chinese market for bauxite ore.

Malaysia is the world’s second largest producer of durian, a sweet, malodorous fruit embedded within a strong, spiky husk. Yet crops of the fruit in Kuantan, the ground zero of the bauxite mining disaster in Pahang, have been failing recently. A local seller, identified as Koh Yen Boon, told the Reuters news agency that he received a third less volume of fruit from local growers last year. “There was less produce to sell,” he said, noting that many plots of farmland had either been converted into mining sites or else been badly affected by bauxite mining. “The remaining trees were covered in red and brown dust,” he said.

Natural pollinators of durian flowers, like birds and bees, have likewise been badly affected by the extensive pollution, further adding to the woes of local farmers. The government imposed a three-month ban on all bauxite mining in Pahang, effective of January 15, yet environmentalists say that that time frame will hardly be enough to tackle the extensive pollution. Khaidir Ahmad, the local president of National Treasures Protection Society (Peka), has called for a three-month extension to the current moratorium. “The first phase of moratorium [was meant to be used] to clear all the stockpiles [of bauxite] at the port area, but they have only cleared half of it,” he said. “That’s why we have no confidence that they will meet the target for the second phase.”

Clearly, things continue to stink in Pahang worse than durian.