Pangolins are Rescued at a Road Block 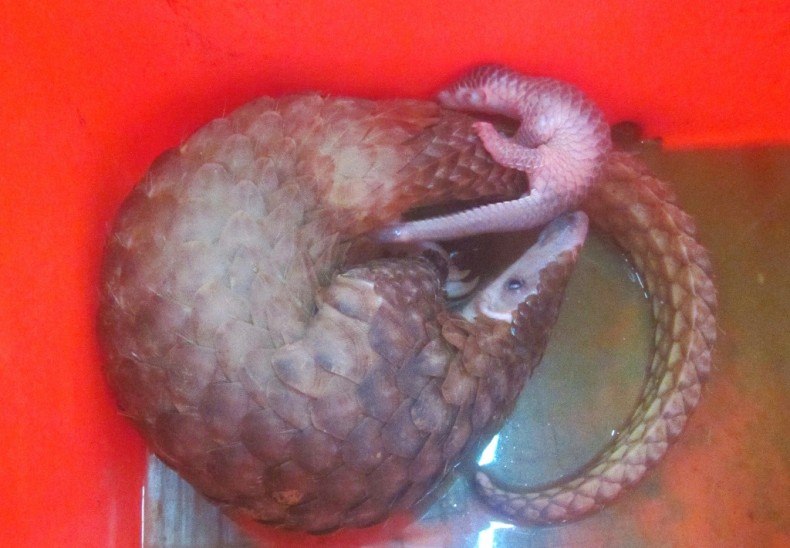 A female pangolin and its young were among the 25 live pangolins that were rescued during a routine check on vehicles at a road block in Sabah. Photo Credit: WWF-Malaysia

Pangolins are gentle creatures encased in armor from head to toe, yet their scaly hides can ill afford to protect them from their greatest enemy: humans. Poaching has driven these flamboyant insectivores to the brink of extinction in Malaysia’s forests, but their endangered status has not stopped unscrupulous traffickers from continuing to try and smuggle the beleaguered anteaters out of their natural habitats, alive or dead.

A case in point: A man in Sabah was recently apprehended for carrying 25 live pangolins in his car. The animals, which had been crammed into small cages and placed in the trunk of his vehicle alongside a sack of pangolin scales, were discovered during  a routine check on vehicles at a road block along the Sandakan-Lahad Datu segment of a local thoroughfare. The 55-year-old man is facing the prospect of up to three years in prison and a fine of RM30,000 for possessing a protected wildlife species without a permit. Ironically, the day of his arrest, on February 20, marked World Pangolin Day.

“The department will conduct more road blocks to curb illegal hunting of wildlife in Sabah and all wildlife offences will also be brought to court for prosecution,” William Baya, director of the Sabah Wildlife Department. Local wildlife officials have been conducting random inspections of vehicles on Sabah’s roads alongside teams of the conservationist group WWF-Malaysia’s Honorary Wildlife Wardens (many of whom have been recruited from local communities) in an effort to catch wildlife traffickers red-handed. 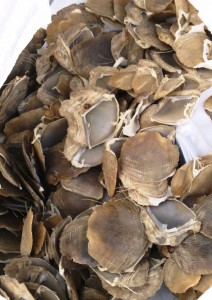 A sack of pangolin scales was also discovered in the trafficker’s car. Photo Credit: WWF-Malaysia

The rescued pangolins are well, but it remains to be seen whether they can all be released back into the wild, where they might fall victim to poachers yet again. Pangolins are increasingly endangered across Malaysia as their meat is prized on the exotic food market and their scales are believed to have medicinal properties (which they don’t).

WWF-Malaysia’s executive director, Dr. Dionysius Sharma, hailed the capture of the local trafficker and the rescue of the more than two dozen animals. “It is sad that pangolins are hunted, trafficked and killed due to the misguided belief in their medicinal properties, none of which has been proven scientifically,” he wrote. “According to the Convention on International Trade in Endangered Species of Wild Fauna and Flora, pangolin skin is used to manufacture boots, shoes and other leather items, while its scales are found in traditional medicines.” He added: “Then there is pangolin foetus soup, which in some Asian countries is wrongly believed to be nature’s answer to Viagra.”

Reflect on that for a moment: some people will think nothing of feasting on hapless baby pangolins just so they can have a chance at an increased libido. For shame. Needless to say, no part of a pangolin, young or old, has any scientifically proven aphrodisiacal properties. People’s ignorance is slowly but steadily killing Malaysia’s pangolins and other endangered wildlife species. A study commissioned last year by WWF-Malaysia of 353 households within 66 villages in four large areas around Sabah found that in just over a period of two months, 1,918 heads of wildlife were hunted by locals. Of them, 85% were done so for domestic consumption and 15% were traded. Of all those animals, 61 were pangolins, every single one of which was sold on the illegal wildlife market. Reflect on that too.