The Doves that will Sell for a Song 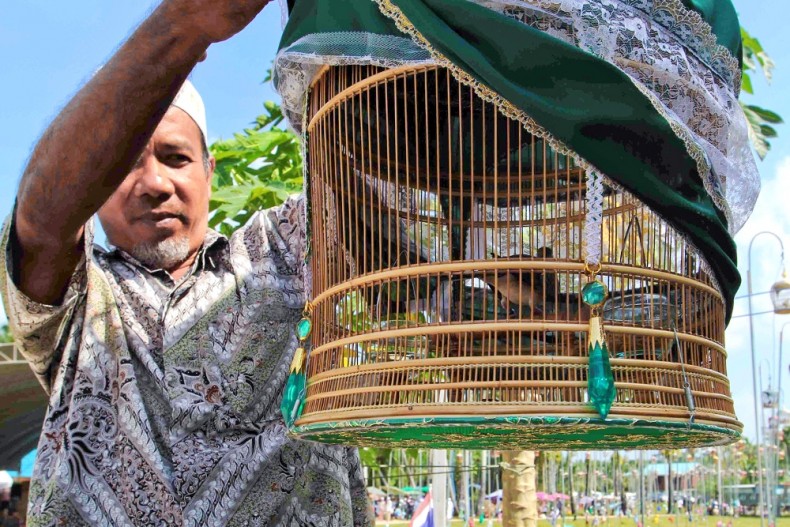 An ethnic Malay man tends to his birds during an annual singing competition for Javanese doves in the Muslim-majority province of Yala in Thailand. Photo Credit: Bernar News

You might think that the price tag of 355,000 ringgit for a bird commonly found across the region might be a tad excessive, but then again you probably aren’t a diehard aficionado of barred doves. These pretty little birds have long been prized by breeders for cooing beautifully. How beautifully? So beautifully that you can judge them on the tones.

And judge the birds avid breeders recently did at a two-day contest, on February 20 and 21, in Pattani, Thailand’s southernmost province, bordering Malaysia, with a predominantly ethnic Malay population. Malaysian, Singaporean, Indonesian and Thai enthusiasts of the doves’ throaty talents entered more than 1,700 birds for melodious competition in five separate categories, including low tone, medium tone, high tone and mixed tone. During this “Malaysian Idol” for ground barred doves, zebra doves and Java doves, birds are judged on the melody, the volume and the pitch of their song. The best coo must be resonant and rhythmic, and a dove must be able to sustain it for longer periods. 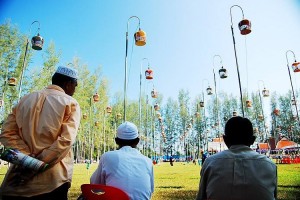 Three men observe the talent at the singing competition for doves in Yala. Photo Credit: Richard Barrow via thaifestivalblogs.com

The annual ASEAN Ground Barred Dove Festival in Yala draws numerous bird lovers from across Malaysia, and some are willing to break the bank just to acquire a new feathered friend. “The prices of Java doves are still strong despite a drop in rubber prices,” said Wichai Reungreongsakulrit, chairman of the Association of Java Doves in Southern Thailand. “A baby bird with good pedigree can sell at 200,000 baht (RM24,000).”

But then there’s “Superman,” a dove so named for being considered the current showstopper among sweet singers. This reigning champion, which hails from Yala, another Malay-majority province in Thailand, is valued at 3 million baht, or RM355,000 (US$84,000). Reportedly, however, his owner won’t sell the apple of his eye even for that fortune as many breeders believe that exceptional birds are worth any price because current champions will father the next generations of cooing talents.

The competition in Yala has been held for decades, despite an Islamist insurgency that has claimed thousands of Buddhist and Muslim lives over the past decade in Buddhist Thailand’s three Muslim-majority southernmost provinces. Adding some extra flair to the competition, many bird owners have a penchant for naming their feathery protégés in rather flamboyant ways. At the event of 1988, as the Los Angeles Times reported at the time, a Malaysian Chinese coffee shop owner from Penang competed for glory with a dove he had named Hitler, after the genocidal German dictator.

During a three-hour singing competition, “Hitler, [a] 3-year-old alto, sang his heart out – a perfect, full-throated, melodious wao-le-ke-te-kong , long and strong on the first and last syllables, over and over again,” the newspaper reported. “The little dove with the notorious name (“I like Hitler,” his owner said, shrugging) took first place among the altos and undoubtedly sent his $8,000 asking price soaring.” Hitler is presumably long past his prime by now, but the show must go on.