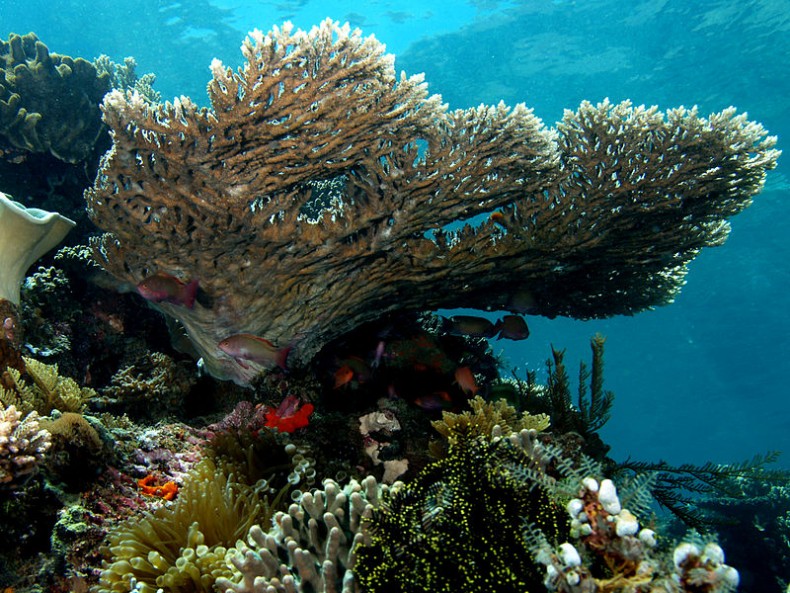 Table corals in Malaysian waters provide home to a variety of species that create a vibrant symphony of colors under the sea. Photo Credit: Wikimedia Commons

Brace yourself. Malaysia’s coral reefs are doomed. That’s according to Natural Resources and Environment Minister Dr Wan Junaidi Tunku Jaafar. The culprits: El Nino and anthropogenic climate change. All Malaysia can do is try and minimize the damage to its coral, the minister said. The double whammy of this year’s particularly strong El Nino phenomenon and the adverse effects of climate change on marine ecosystems might devastate as much as 90% of Malaysia’s already stressed coral reefs.

Yet that does not mean Malaysians themselves are off the hook over the fate of the nation’s coral reefs, which are home to a broad spectrum of marine species. Pollution and invasive fishing practices are likewise wreaking havoc on much of the country’s 3,600 square kilometers of reefs. Blast fishing has taken its toll. So has “ghost fishing,” the practice of using substandard and derelict fishing gear which often damages corals by enveloping them in discarded nets.

“We send scuba divers to monitor the reefs and to remove any nets that may have been caught in them. But we are very shorthanded,” the minister explained. He called for closer cooperation among the various governmental departments to better protect Malaysia’s reefs. That, and better environmental protection laws. “We need the law to fully enable us to protect the underwater ecosystem,” he said, referring to the Fisheries Act, which is currently under the purview of the Agriculture and Agro-Based Industry Ministry, not the Ministry of Natural Resources and Environment . “But we are enforcing someone else’s law,” he added. “I am personally handicapped because of the law.” 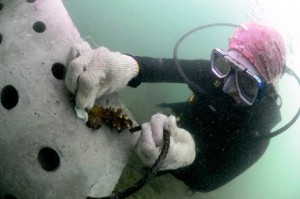 In a ray of sunshine to Malaysia’s corals, environmentalists aren’t just sitting on their hands while watching corals die off. In one of several initiatives aimed at rejuvenating dying reefs, the nongovernmental organization Reef Check Malaysia has been engaged in coral transplant operations, during which its staffers and volunteers remove a piece of living coral in a stressed environment and place it on a substrate elsewhere in the hope that the coral will find a new lease on life there. Environmentally friendly cement reef blocks are used to anchor corals in a prospective new habitat, such as one near the islet Pulau Mentagor off Pangkor Island, with a reported survival rate of 88% for coral transplants.

Reef Check Malaysia also operates coral nurseries and has been conducting educational campaigns to raise awareness of the importance of Malaysia’s coral reefs, these so-called “rainforests of the sea,” with their stunning diversity of life. Malaysia is part of the Coral Triangle, an area containing a world-renowned marine biodiversity hotspot. The country’s coral reefs support 550 species in East Malaysia and 360 species in West Malaysia.

Yet while laudable, coral nurseries and transplants are merely stopgap measures. What is needed is much better protection of existing marine ecosystems. Currently, only around 1.4% of Malaysia’s 453,000 square kilometers of water has been set aside as marine parks. That’s precious little. While we cannot control the effects of a changing climate on coral reefs, we can control how we tend to and protect struggling reefs. And better stewardship of our marine ecosystems can make a world of difference even in the face of climate change.