The Banteng are on the Brink of Extinction in Sabah 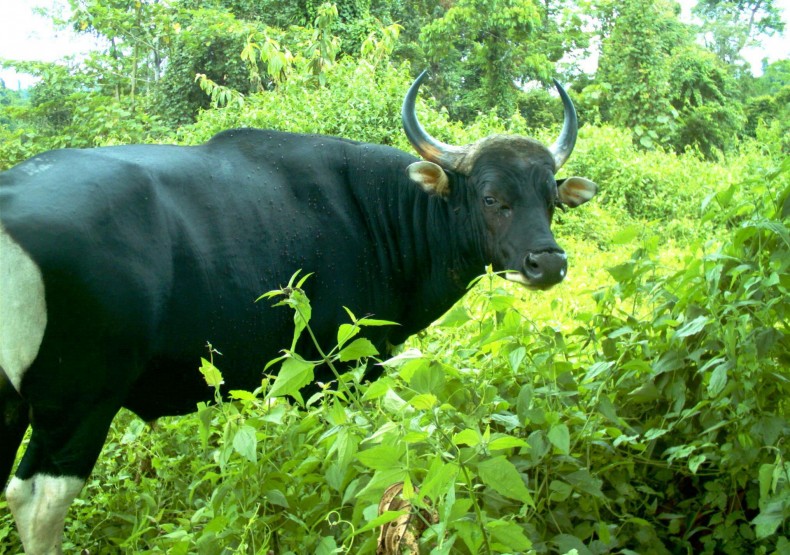 Banteng in Sabah are being driven into extinction at an alarming pace. Photo Credit: Sabah Wildlife Department

Away from the headlines, an oft-neglected species is being driven to the brink of extinction in Sabah’s forests. Meet the Bornean banteng (Bos javanicus lowi). Largely confined to isolated patches within the Sipitang Forest Reserve and the Tabin Wildlife Reserve, the endemic wild cattle, which prefer to dwell in remote tropical lowlands and swamp forests, may well end up following the Sumatran rhino into permanent oblivion in the state’s shrinking forests. Needless to say, that would be a terrible shame.

The shy black-coated animals with their “white leggings” have long been falling victims both to trophy hunters who prize them for their horns and to locals who prize them for their meat. That and relentless habitat loss in increasingly fragmented forests have reduced their numbers in Sabah to a population of just 500. “My fear is that the banteng, which is sought for its meat and horns, will become extinct in our lifetime,” observed Masidi Manjun, minister of Tourism, Culture and Environment. “Sabah is well-known for eco-tourism and it is tragic that we are fast losing many of our iconic animals,” he added. 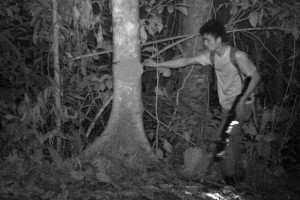 A poacher is captured on a camera trap in the Sipitang Forest Reserve with an automatic rifle. Photo Credit: Danau Girang Field Centre

To make matters worse, there have been reports of wild banteng breeding with domestic cattle, which is bad news as far as environmentalists are concerned because such hybridization is placing the wild animals at further risk of extinction as a distinct subspecies. Ultimately, however, it’s poachers who are primarily responsible for these placid forest cattle’s continuing woes. If their numbers continue to be culled at current rates, they could be wiped out within a few short years.

“It is incredibly saddening to see the carcasses of the animals that we have struggled to research for the past few years, and to continue to witness the ease in which poachers are able to access supposedly protected forests,” Penny Gardner, an expert on the animals from Cardiff University who has worked with the Danau Girang Field Centre in Sabah, said recently. The animals have also been losing their forest homes at a steady pace, becoming boxed into smaller areas where they are easier prey for poachers. Since the year 2000, Sabah has lost well over 15% of its forest cover, mostly to oil palm plantations and logging. “Over the past 30-40 years, the banteng has suffered catastrophic events, which have caused their demise and resulted in the local extinction of some herds,” Gardner added. “Their story is similar to many other species in Sabah, such as the Sumatran rhino, orangutan, sun bear and elephant with the exception of one detail; they are widely unacknowledged.”

Yet few people seem to care about the fate of these largely unlamented bovines. Recently, leading environmentalist groups accused local authorities of doing too little to stop endemic poaching across the state. “We have evidence that the killing is going on and it is time for the public, the government and the NGOs to work together and put a stop to poaching of endangered species in our state,” Benoit Goossens, director of Danau Girang Field Centre, stressed. “Will we need a banteng’s captive breeding program similar to the Sumatran rhino’s one in Tabin to save the [wild cattle]?” he pondered poignantly.