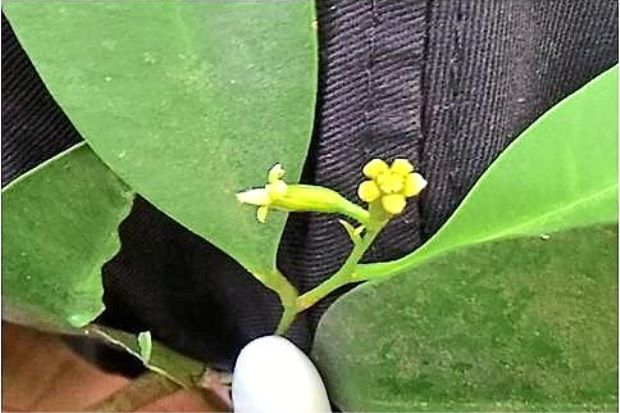 A flower of an Aquilaria rostrata agarwood tree, which has been redicsovered in Terengganu after a century. Photo Credit: UPM

Cases of critically endangered species bounding back into an environment from which they have long been absent are rather thin on the ground, but thankfully they do happen. All right, well, in this case “bounding back” isn’t really the appropriate term. Let’s make that “blooming back.”

A rare agarwood species known locally as Karas Gunung or Chandan Gunung and scientifically as Aquilaria rostrata was first identified in 1911 in Gunung Tahan, in Pahang state. It then promptly disappeared from sight and was presumed extinct. Until now, that is.

Researchers from Universiti Putra Malaysia  have rediscovered the elusive agarwood tree around 100 kilometers away in a forest in Besut, Terengganu, during a field trip in the area. “At first, we thought that it was a new species but after making comparisons with a 100-year old specimen at Herbarium Botanic Gardens, Singapore, we discovered that it was the A. rostrata,” said Dr. Rozi Mohamed, an associate professor at the university’s  Department of Forest Management.

The small tree, Rozi explained, was discovered among felled timber in an elevated area at around 700 meters above sea level. Better yet: it wasn’t just a single specimen. The researchers found around 50 agarwood trees of up to 5 meters tall and they were flowering and fruiting. “This species is endemic [to the area],” she said. “It is not available anywhere else, only in Peninsular Malaysia alone and is in danger of extinction.”

Dr Mohd Nazre Saleh, another associate professor at the university’s  Department of Forest Management, hailed the discovery of the tree long thought to be extinct as a significant find for botanists, not only because of its rarity but also because it has resurfaced elsewhere from where it was first found. The species is protected under the Convention on International Trade in Endangered Species of Wild Fauna and Flora and listed as “critically endangered” under the International Union for the Conservation of Nature Red List.” The tree was driven into extinction at the site where it was originally discovered likely as a result of logging by timber companies, which highly prize rare agarwood. Rozi wants to see the newly rediscovered trees protected from “unscrupulous quarters out to get hold of agarwood.” Indeed.