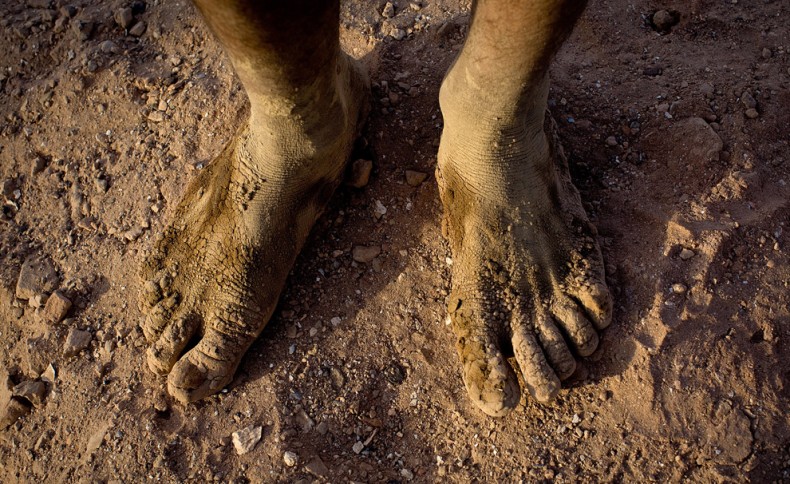 Locals and environmentalists in Kuantan have launched several walks in protest at the pollution caused by bauxite mining. Photo Credit: boston.com

Uncle Woon, an elderly villager in Pahang, wanted to give vent to his ire over the havoc that local bauxite miners have wreaked on his home state’s environment. So one recent morning the 73-year-old set out on a 35km walk from bauxite-ravaged Kuantan to his hometown of Gambang as part of a protest march organized by a local environmentalist group called Red2Green, whose mission is to turn bauxite-reddened Kuantan green again.

Uncle Woon, a subsistence farmer, walked barefoot during the long protest march, alongside another 30 or so protesters, and he made no secret of his motivation for joining the peripatetic demonstration. “I am willing to walk this far to fight for the health of my children and grandchildren,” he explained. The elderly farmer added that he was especially concerned about extensive and widespread water pollution caused by unregulated bauxite mining in Kuantan before a three-month moratorium on all mining in the state came into effect on January 15. 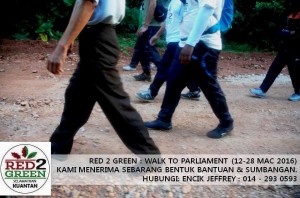 A poster by the environmentalist group Red2Green is recruiting participants for its long walk to Parliament. Photo Credit: Red2Green

He should be worried. Fresh water sources in the area may have been contaminated with heavy metals to such a degree that locals could be at risk of the horrifying effects of heavy metal poisoning, according to Maketab Mohamed, an associate professor at Universiti Teknologi Malaysia who is a well-known environmentalist. “Almost all the water for consumption in Kuantan is drawn downstream from the mines,” he explained recently. “The full impact of this is not appreciated as water samples drawn for testing by the Department of Environment were not from rivers used for drinking water.”

In coming days and weeks ahead of April 15, when the moratorium on bauxite mining in Pahang is set to expire, Red2Green will be stepping up its campaigns – literally stepping them up by launching new protest walks around the state and farther afield. The group’s walks have been inspired by similar protests undertaken by Malaysians over the past years, including mass walks against the Lynas rare earth plant in 2012. Red2Green’s protest marches will culminate in a walk from Kuantan to the heart of the federal government in Putrajaya, where they are expected to arrive on March 28.

Reportedly, official clean-up efforts in Kuantan have been progressing reasonably well and local mine operators have been abiding by the temporary ban on bauxite mining. “We will continue the 24-hour monitoring at nine inspection centers in this district,” said Pahang police chief Sharifuddin Ab Ghani. The inspection centers have been operating around Kuantan since early January to monitor the movements of lorries used for transporting bauxite.