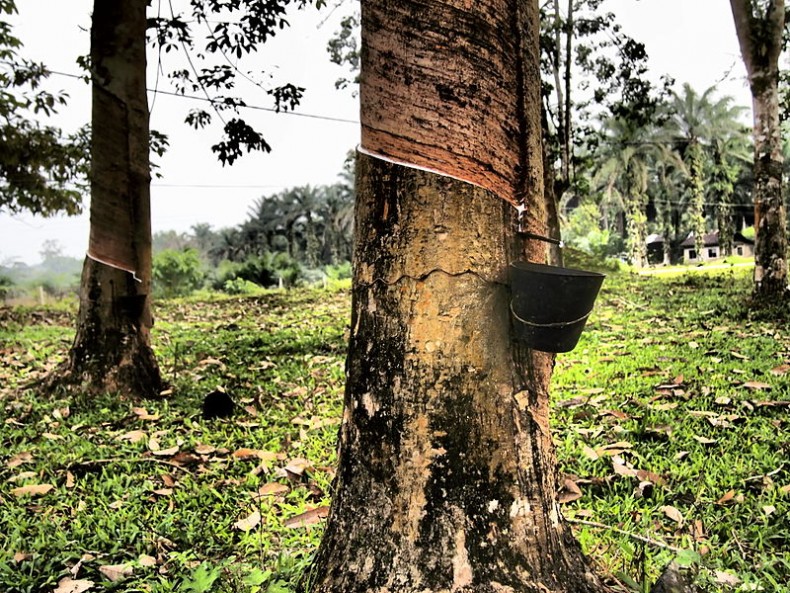 Rubber trees in Malaysia at a local plantation. The country is a leading producer of natural rubber in the world. Photo Credit: Wikimedia Commons

We have some good news and some bad news. The good news is that the Trans-Pacific Partnership Agreement (TPPA) will lead to an elimination of tariffs for about 85% of rubber products from Malaysia, while tariffs on other rubber products will be phased out within 16 years from 2018, when the international trade pact comes into effect.

A steep reduction in tariffs, needless to say, will be a boon to Malaysia’s rubber industry. The country is among the top 10 exporters of rubber products to TPP countries, whose total imports of such products, including both consumer and industrial varieties, by the trade group’s 12 members amounted to an estimated US$96 billion (RM394 billion) in 2014, with world imports amounting to a total of US$269 billion (RM1.1 trillion) that same year. Meanwhile, Malaysia’s two main rivals in rubber production in the region, neighboring Thailand and Indonesia, are unlikely to join the trade pact in coming years, thereby allowing Malaysia a competitive edge on the world market.

So far, so good. So what’s the bad news? Here is what: Higher profit margins may well induce local rubber tree cultivators to plant yet more trees, which may well come at the expense of ever-shrinking forests that are fast losing out as it is to another mass-grown crop: oil palm. Plantations of various kinds already cover almost a third of all land area (around 30.2%) across the country, according to data collected by the international monitoring group Global Forest Watch. The majority of plantations comprise oil palms, with rubber trees at second place. “In Malaysia, more than 24,000 [hectares] of plantations are located in areas that were Intact Forest Landscapes in 2000,” the watchdog notes.

Most of the rubber tree plantations are clustered around Peninsular Malaysia, which is among the world’s most important rubber-growing areas, with rubber also grown in Sabah and Sarawak. Together, the country’s 14 states produce almost a fifth of the world’s natural rubber on around 1.3 million hectares of land in total, although production rates have been declining in lockstep with the growing dominance of oil palm cultivation. Four-fifths of locally produced rubber, known domestically as “pokok  getah,” is grown on thousands of small, privately owned plots of less than 2.5 hectares, according to the Malaysian Rubber Board. Small though those plots may be individually, they add up collectively.

The country’s stressed forests can ill afford to lose out even more to plantations, be they of oil palm or rubber tree or any other crop. Malaysia’s natural environments have been coming under increased stress over the past years and decades, and sustainable agronomical practices will be key to ensuring that the nation’s world-famous flora and fauna are protected from any further despoliation and exploitation. Malaysia is facing a do-or-die moment when it comes to the preservation of its beleaguered natural ecosystems. The nation’s economic progress is important. But so is the health of its environment.