What is Earthship Malaysia? 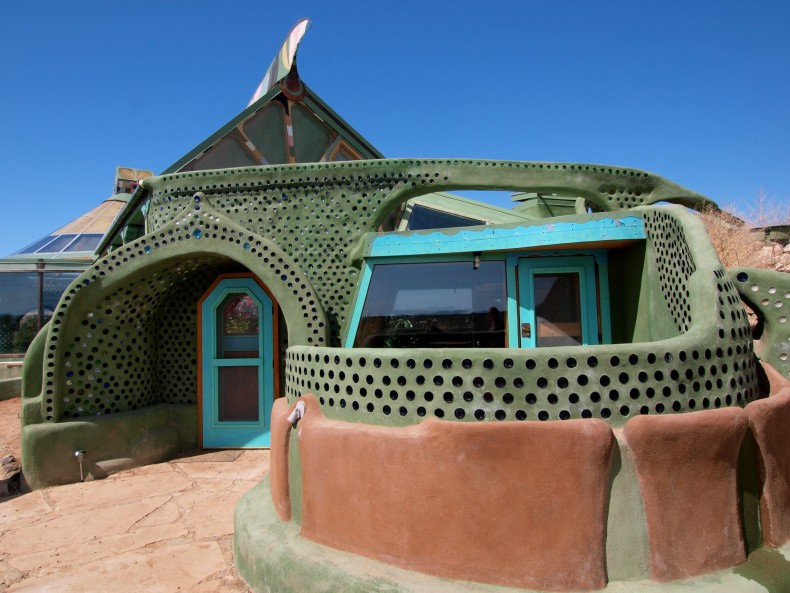 by She Mei Tan

Is it possible to build a house using entirely natural and recycled material? Can a rainwater harvesting system supply sufficient water for an entire household? Can a solar panel truly, significantly reduce our dependency on fossil fuel for electricity? Can we survive the heat in Malaysia without an air-conditioner?

Thanks to visionary American architect Micheal Reynolds, the answer to all of these questions is yes. For 40 years now, Reynolds has been building super-sustainable homes as part of a long-running international project called Earthship.  The ideas explored in Earthship building are revolutionary – and in a few short months, they will be on display here in Malaysia.

Malaysia’s first ever Earthship, by Build for Tomorrow, has landed itself in Jelebu, Negeri Sembilan last September. Build for Tomorrow, founded by Rubén Cortés and Dr. Reza Azmi was established as Wild Asia’s response to the lack of sustainable building options across Asia. The Earthship project aims to provide the Temuan indigenous people living in Jelebu a sustainable home. How sustainable, you ask? Consider the following.

How does an Earthship Function?

The core concept in building an Earthship is to reuse and recycle as many resources as possible so as to reduce using new material. No bricks are required, instead over 900 used tyres are collected and filled with dirt to build the foundation of building. About 2000 sandbags are then stacked on that foundation to build the wall of the building. Malaysia generates about 8.2 million of motorcar waste tyres every year and 60 percent of it is disposed via unknown routes[1]. With this daunting fact, it is good news that Earthship is creating a solution for disposed tyres. 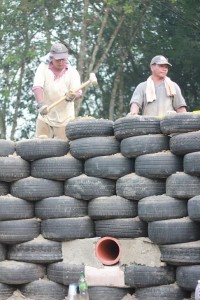 Tires create a temperature-insulating and earthquake-proof outer wall. They also chip away at the staggering number of trashed tires Malaysia creates yearly.

As for water supply, an Earthship depends largely on rainwater harvesting (RWH) and recycling of used water. The RWH tank is able to sustain about 50 people for three weeks in the case that there is no rain at all. Water collected from RWH tank will go through two different types of filters – namely a sediment filter and a bacteria filter water that goes through the sediment filter is meant for external use i.e. washing clothes, shower, etc. while the bacteria filter will provide portable water meant for drinking and cooking. The bacteria filter is able to kill 99.99% of bacteria without having to depend on chemicals like chloride and fluoride as in our conventional water supply. This gives the people high quality chemical free water.

Earthship is also unique in that it has its own sewage treatment. The waste water produced after washing clothes and showering (greywater) is channeled to a food production plant. The food production plant acts as a biofilter, and the filtered water will be channeled back to the toilet for flushing purposes. The wastewater from toilet, now called blackwater, will go to the on-site septic tank for sewage treatment. After the wastewater is being treated, it will be channeled again to the organic food production plant. The fundamental concept is that gray water from the sink is recycled and purified by feeding into the plant before being used to flush the toilet. Thus, plants play a direct role in the maintenance of the house.

Malaysia’s sun is powerful enough to charge solar panels so that no utility bills need to be paid in an Earthship. An Earthship is also a thermal mass home.  The earth that is rammed into the tyres and layered on the wall of building is a material that can absorb and store heat energy. It takes lots of heat energy to change the temperature of the earth, so the earth is able to keep the room temperature of the building to be at the average of 25 to 36 degree Celsius.

The Earthship in Malaysia, which consists of two houses and one community hall, is fully equipped with electricity, water supply, sewage treatment, a food production plant and cool internal temperatures. Once the remaining ten percent of the work is completed (in early April 2016), the Earthship houses will be able to serve two families while the rest of the Temuan people shall enjoy the community hall for assemblies, celebrations and various other activities. Many people will enjoy these benefits for years to come, but they have one person – Ruben Cortes – to thank for it.

The Founder of EarthShip Malaysia

From the beginning, the Earthship Malaysia project has been driven by the passion of Rubén Cortes for sustainable building. Despite making a good living by working for large companies and running a project with a few friends in Mexico, he has a strong motivation to make use of his background in marketing and business development for social and environmental causes. He then found a place in Save Children in Asia Organisation (SCAO) – an NGO in Cambodia that provides education for poor children that needed Rubén’s expertise on business development and marketing. He immediately fell in love with the country and learned that such work is much more meaningful than just making money.

Ruben realised that the concept of social entrepreneurship corresponds with his personal belief.  He then worked with Wild Asia – a social enterprise focusing on conserving natural areas and providing support to the local communities – after his contract with SCAO ended. During his work with Wild Asia, he learned that Malaysia is lacking in low impact construction in Malaysia, particularly in high conservation value areas. Ruben saw that Malaysia’s abundance of resources is a vast opportunity waiting to be seized. After completing the project with Wild Asia, he enrolled himself in the Earthship Academy – conducted by Michael Reynold – to learn more about sustainable building. Being a part of Earthship international building crew, Rubén has been involved in various projects and was also one of the main coordinators of the Windship Project, an effort born in response to the devastation of Typhoon Haiyan in the Philippines.

Upon returning to Malaysia, Ruben’s great passion for social issues and sustainable models of led him to start a sustainable building initiative called Build for Tomorrow in Wild Asia. He started off by conducting workshops and talks to inspire people about the possibilities of recycled construction materials. Through word of mouth, a group of volunteers in Jelebu – that have been supporting the indigenous people in Negeri Sembilan by promoting development and education – reached out to Rubén with an interest in having an Earthship built for the Temuan community. Excitedly, Rubén conducted a presentation to the Temuan people (translated by locals) on the concept of Earthship. All he saw were glittering smiles and enthusiastic nods. Through mutual agreement, Rubén focused on designing and directing the construction work while the volunteers take care of the budget needed for the project.

The first such home, or ‘Earthship’ was built in Taos, New Mexico, but Reynold’s vision has become a movement and has spread across Germany, Africa, Australia, New Zealand, the Philippines, Europe, Canada, Central America, South America, and the United States.

Today, Earthship has spread to Malaysia, and our country supports the sustainable home better than many others. Earthship is sustainable because natural and recycled building materials reduce usage of cement, electricity is generated from solar panels, greywater produced from showers and sinks is used to grow plants and flush the toilet and the natural building concept offers a comfortable temperature that needs no air-conditioner. Earthships prove that by properly managing the resources around us, we can sustain ourselves longer without having to shoulder the bills every month.

A New Hope for Malaysian Housing?

The ideas behind Earthship could solve a lot of big problems for Malaysian housing.

Purchasing a house in the city of Kuala Lumpur is getting more difficult with rising prices. And even if one acquired a condominium unit, various problems may occur due to construction failure. The most common physical problem faced is delamination of exterior walls due to water seeping into the walls and roof. This should not be happening as a building should be designed to prevent water vapour from passing through. Not only does this greet a homeowner with maintenance hassles, but high electricity and water bills as well.

Due to the large amount of cement needed to build concrete houses and the high consumption of resources (water and energy) by a homeowner, there is basically no house in Malaysia that is sustainable. Not only are concrete buildings unsustainable, they’re also vulnerable to earthquakes. The recent M-6.4 earthquake in Taiwan toppling high-rise concrete building reveals the fragility of modern buildings. 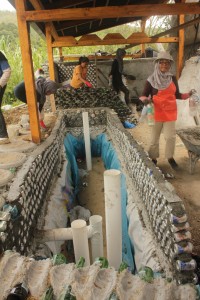 Many hands make light work as glass bottles are carefully laid, minimizing the use of environmentally-taxing cement.

With Earthship, all of these drawbacks disappear. Earthship is different from any conventional building for it can heat and cool itself, harvest its own water and energy, treat sewage while growing plants, and most amazingly, resist earthquakes and wind. These are all things Ruben Cortes had in mind when he started Earthship Malaysia, but as he himself opines, the ideas don’t have to come from just himself.

To The Next Earthship Builder: Just Start

When asked on his advice for the next person who wants to build an Earthship, Rubén replied with two words – just start. Starting from something as simple as recycling, composting or even installing a RWH system that can flush three toilets in a house is a great achievement on its own. This is because the sustainable lifestyle is addictive. One simple step is good enough for a person to continue the drive.

Throughout his Earthship’s journey, various challenges were encountered including a lack of funding, the skepticism that only developed countries can accomplish such initiatives, and many more. One of the biggest challenges faced by Rubén so far is being the only qualified and trained Earthship builder. Thus, on a usual basis, Rubén directs around 20 volunteers and educates them on the technical aspects of the Earthship. He is also the mastermind of the whole design and calculation aspect of the RWH and energy system.

The obstacles do not stop him from keep going and as a matter of fact, his sincerity in promoting the right cause has attracted like-minded people to join him. Ruben does not believe in the boundary created by borders, nationalities and languages. Thus, helping the Temuan community and other people is equivalent to helping himself and the future generation.

Check out the links below to find out more about:

And, watch the progress of Earthship in Jelebu on Youtube: https://www.youtube.com/watch?v=nTJRAmY8Mgw&feature=youtu.be