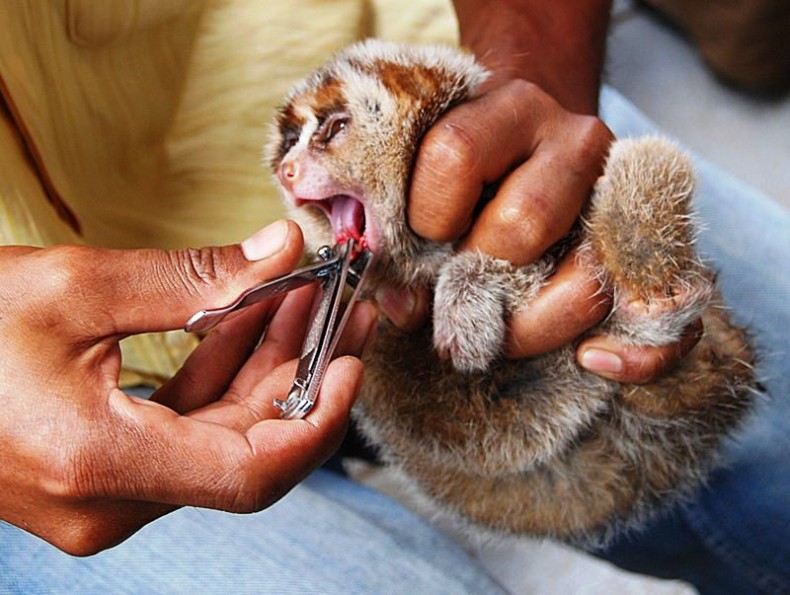 A wildlife trader cuts the canines of a slow loris with a nail clipper so the animal, which was taken from a forest, will not be able to bite in self-defense. Photo Credit: Wikimedia Commons

People often do the wrong things for the right reasons. They may seek the companionship of pets, yet rather than settle for domesticated animals like cats and dogs, they may decide to own members of more exotic species –especially “cute” creatures like slow lorises and binturongs. Wishing to have pets may well be a good thing; opting for exotic pets almost never is.

Even with the best of intentions, most owners of exotic pets simply cannot provide adequate environmental enrichment for captive wild animals that are unsuited for being pets. Arboreal creatures like gibbons that love to roam far and wide in forest canopies end up being confined to small cages. Nocturnal animals like slow lorises and sugar gliders that come truly alive only at night are petted all day long and carried around in bags as if they were inanimate toys. Winged birds like hornbills that love to take to the skies in the wild wind up spending all their time tethered to a post. 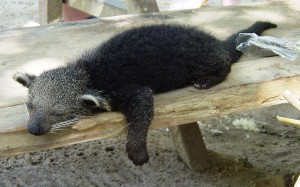 Routinely, wild animals owned as pets are also reduced to surviving on inadequate or substandard diets. Insectivores like lorises are often fed only fruit and cereals, or even worse, sugary treats that rot their teeth and damage their health. Many exotic pets slowly waste away or die of preventable diseases. Many others are abandoned to their fate in a nearby forest or dumped at animal shelters after their owners tire of them, since exotic animals rarely make good pets.

Then again, many animals poached from forests never even make it to illegal exotic pet markets in the first place. That’s because their captors frequently treat them with callous brutality, handling them roughly, squeezing into small hidden recesses, leaving them to starve, and even clipping their canines so they wouldn’t bite or taping their beaks shut so they wouldn’t make a noise. 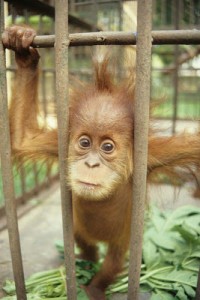 A baby orangutan kept as a pet looks out through the bars of its cage. Photo Credit: TRAFFIC

And the exotic pet trade endangers the well-being of not only individual animals held in captivity but of their entire species in the wild as well. Poachers habitually scour Malaysia’s forests in search of animals that can be sold as pets, thereby decimating wild populations. Often, young animals are taken from their mothers, which are killed and either sold as body parts for traditional medicine or left behind in the forest. A heartbreaking practice? You bet. And by further reducing the numbers of already endangered animals, it also whittles down a threatened species’ long-term viability year by year by year.

Meanwhile, exotic pets, from snakes to captive-bred Bengal cats, that are released into the wild may end up wreaking havoc on native species by either preying on them or else spreading new diseases to them. “Any released or escaped introduced species will compete with native species for food and territory and cause an imbalance in the local ecology,” explains Wong Ee Lynn, of the Malaysian Nature Society.

The wildlife trade, both the legal and illegal variety, is hugely lucrative. The legal wildlife trade is estimated to be worth $183 billion globally, while the illegal wildlife trade is worth somewhere between $7 and 23 billion, making it the third largest illegal trade by dollar value after drugs and guns. “Wildlife crime is a big business,” explains the World Wide Fund for Nature (WWF) on its website. “Run by dangerous international networks, wildlife and animal parts are trafficked much like illegal drugs and arms. By its very nature, it is almost impossible to obtain reliable figures for the value of illegal wildlife trade.”

And Malaysia is a regional hub of it, with the country serving as one of the biggest exporters of wild animals in the world. Most of them are snatched directly from their natural habitats, despite harsh penalties for illegal wildlife trafficking, thereby robbing the nation’s forests of their unique wildlife and further driving endangered species to the brink of extinction.

“[The trade] goes on in silent in the black market unbeknownst to most people,” observes Suwanna Gauntlett, a world-renowned environmentalist who is president of the international conservationist group Wildlife Alliance. “It is also known as a very innocent activity with consumers who keep exotic pets at home, but most often than not, those pets are taken from the wild,” she adds. 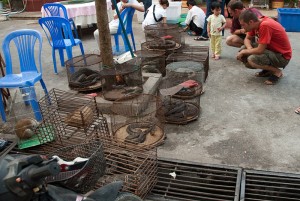 That is why we would be wrong to blame only criminal syndicates for the plight of exotic pets and their beleaguered species. These syndicates do not operate in a vacuum; rather, they cater to growing demand for exotic pets among members of the general public. TRAFFIC, an international wildlife trade-monitoring watchdog, has recently found that social media in Malaysia are hotbeds for the illegal exotic pet trade.

“Just half an hour’s daily monitoring over five months by TRAFFIC researchers of 14 Facebook Groups in Peninsular Malaysia found more than 300 apparently wild, live animals for sale as pets, ranging from Sun Bears (Helarctos malayanus) and gibbons, to otters and even Binturong (Arctictis binturong),” TRAFFIC noted. More than 60% of the 80 species offered on Facebook for sale, the watchdog added, were from around the country during the period it surveyed.

Needless to say, one more exotic pet in captivity is one less wild animal in the country’s forests. At this rate, the country’s exotic wildlife, once a pride of the nation, will soon be no more. The country is facing a do-or-die moment in conservation and wildlife protection, as local environmentalists have long been warning. Only as few as 250 tigers, for instance, are left in the wild across Malaysia, a country that proudly sports the majestic predators on its coat of arms.

Globally too, the situation is bleak. Over the past 40 years alone, an estimated 52% of the planet’s wildlife have been wiped out, even as the world’s human population has nearly doubled over the same time period. The extinction rate of animals across the globe is a shocking 1,000 times higher than normal in what scientists have dubbed the “Sixth Extinction” of mass species deaths (or “defaunation”) in the planet’s history. In a shocking bit of statistics, there are more tigers kept in the United States as pets (5,000) than there are tigers left in the wild around the entire planet (around 3,000). Meanwhile, some 28,300 freshwater turtles are traded every single day around the world (mostly as food and as pets), even as 80% of Asia’s freshwater turtle species are in danger of extinction.

So what to do? Bury our heads in our hands in desperation? That won’t do. For starters, we can all stop buying exotic animals for pets, no matter how “cute” or beautiful or exciting they may be. “The best thing is not to buy [mammals,] snakes, reptiles or birds from the pet stores. Just don’t buy them,” Gauntlett counsels Malaysians. Wong Ee Lynn concurs. “The only true way to show love and admiration for a particular species,” the conservationist stresses, “is to protect its habitat and wild population, and observe it in its natural environment.” Amen to that!