Indigenous People Score an Epic Win: the Baram Dam has been Scrapped 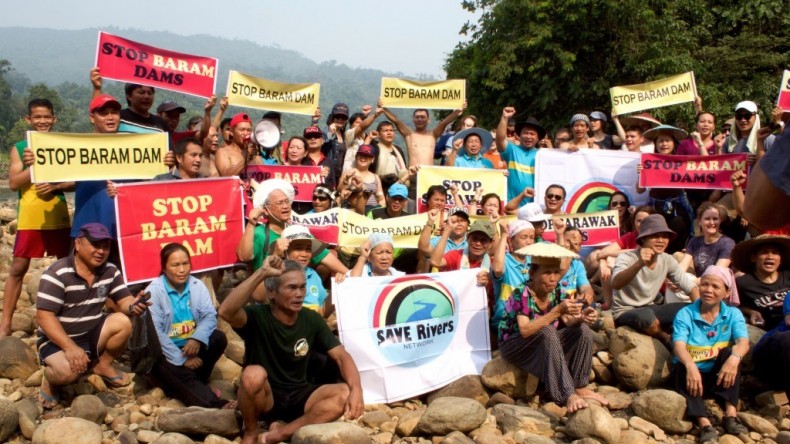 Local people in Baram stand shoulder to shoulder with environmental activists during a blockade of the site for the planned dam. Photo Credit: The Borneo Project

Chalk a victory up to grassroots activism. And a giant victory at that. Sarawak’s government has officially backed down from its plan to build a hydroelectric dam on the Baram river, following fierce opposition to it from local indigenous communities.

Local villagers had been fighting tooth and nail against the proposed dam for years before the project was finally put on hold last July – but not before the government had appropriated native customary rights land for it. The appropriated land included villages, farms, cemeteries, and reserve land known as pulau galau. The dam, which was planned to be one of 12 constructed on the river in a multi-billion dollar hydropower project as part of the Sarawak Corridor of Renewable Energy scheme, would have displaced up to 20,000 locals from Kenyah, Penan and Kayan communities. The dam would also have destroyed a large swathe of the Baram area’s natural ecosystem by flooding 412 square kilometers of rainforest.

In a last-ditch attempt to thwart its construction last October, local activists blockaded the site with makeshift barricades to prevent surveyors, road builders and loggers from gaining access to it. The protesting villagers stayed put even in the face of threats by the authorities to use force to dispel them. Their heroism has paid off. At long last the gazette for the confiscated native land that had been earmarked as the site for the dam and its reservoir has now been officially revoked.

Peter Kallang, chairman of SAVE Rivers, a network of indigenous communities and civil society organizations in Sarawak that spearheaded the grassroots campaign against the planned dam, hailed the villagers’ historic victory. “I congratulate the people of Baram [on] this great success and I pray that they will continue to fight for their rights and protection of the environment,” he said. “I would also like to thank the Chief Minister Adenan Hj. Satem, who has heard the people’s voice,” Kallang added. “He announced the moratorium on works for the dam [on the 30th of July last year] and now he has returned the land. I hope that the chapter on Baram dam is now permanently closed.”

Not only is this win one for all indigenous people across Malaysia; it has also demonstrated the power of peaceful grassroots activism. If they stand firm and shoulder to shoulder, ordinary people can become a powerful force for good in defense of natural environments. Let their success be an inspiration to us all.