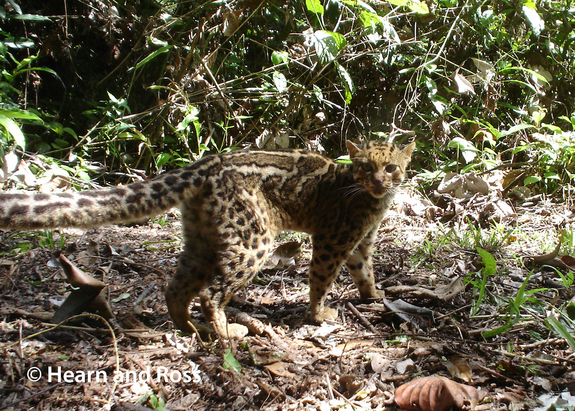 A marbled cat gazes in the direction of a hidden motion-triggered camera in a forest of Sabah. Photo Credit: Andrew J Hearn and Joanna Ross

Borneo’s marbled cats are among the most elusive felines in the world, preferring to spend their time away from prying eyes within dense tropical forests. But now people are after them.

Luckily for the endangered animals, those people are scientists who want to find out more about the population densities of the wild cats within their natural ranges in Malaysian Borneo. To that end, a team of researchers from the University of Oxford in the United Kingdom recently set up a network of hidden camera traps in eight forests and two oil palm plantations around Sabah. Then, for a period of four months, they monitored their motion-triggered infrared cameras for any sign of the little understood felines, famous for their pretty marble-patterned coats. 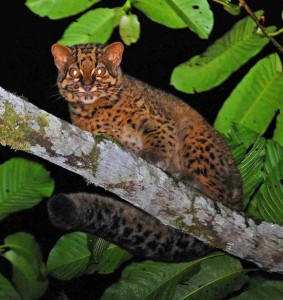 A marbled cat walks along a branch in a Sabah forest. Photo Credit: Andrew J Hearn and Joanna Ross

Their findings, which they have just published in an academic journal, indicate that Sabah’s marbled cats (Pardofelis marmorata) invariably reside in lowland areas with undisturbed forests. The cats seemed to shun oil palm plantations entirely with none of them being recorded within them, although a single individual was captured on camera walking along the boundary of a forest and an adjacent plantation. “This felid is thought to exist at low population densities throughout its range, yet no estimates of its abundance exist, hampering assessment of its conservation status,” observe the researchers, who managed to take several photographs of the rare cats, including those of cubs in the Tabin North, Tawau and Ulu Segama forests.

Based on their new estimates, the population density of the cats ranges from 19.57 individuals per 100 square kilometers per in the primary forests of lowland areas in the Danum Valley Conservation Area to around 7.10 individuals in the primary forests of upland areas in the Tawau Hills Park. In the lowland Tabin Wildlife Reserve, which was selectively logged for 20 years between 1969 and 1989, the scientists estimated a density of 10.45 individuals per 100 square kilometers.

“We show that marbled cats can still survive in logged forests,” explained the study’s lead researcher Andrew J Hearn, a doctoral candidate at the University of Oxford’s Wildlife Conservation Research Unit. “This lends further weight to the argument that such disturbed forests are important to the conservation of biodiversity and should be preserved wherever possible.”

The felid species is listed as “near threatened,” not as endangered, but that is largely because little has been known about their numbers until this latest round of more systematic research. It is illegal to poach marbled cats in Sabah, but the researchers say they discovered evidence of poaching, in the form of shotgun cartridges, in seven of the eight forests they surveyed. The cartridges indicate that poachers frequent the forests, although they may not be hunting marbled cats themselves.

Stricter anti-poaching measures can help protect the rare cats, as well as other endangered species in Sabah’s forests. So can the preservation of all existing forests in the state, including logged ones. “We provide further evidence that logged forest may still be used by these cats, and should be preserved,” Hearn noted.

Tags: conservation efforts in Borneo, marbled cats in Sabah, the use of motion-triggered infrared cameras for conservation purposes