A Case of DIY Sustainability along the Banks of the Kinabatangan

Local villagers lend a hand in replanting efforts along the banks of Sabah's Kinabatangan river as part of a do-it-yourself project of environmental protection. Photo Credit: Star2.com

The Kinabatangan, Sabah’s second longest river, supports a kaleidoscope of flora and fauna in both aquatic and terrestrial habitats. Its banks, and floodplains alongside them, are home to a large diversity of wildlife, including endangered species like proboscis monkeys and orangutans. So the river is crucial for people and animals alike, yes. Yet its health has been badly compromised by pollution from unsustainable oil palm cultivation and soil erosion on its banks owing to deforestation. So what to do?

Project RiLeaf has the answer – or at least part of the answer. The sustainability initiative is a collaborative effort between Nestle (Malaysia) Berhad and Yayasan Sime Darby (YSD), the main philanthropic arm of the multinational conglomerate Sime Dary Berhad. The project seeks to restore riverine forests by planting trees along the banks of the Kinabatangan in a large riparian area – and to do so with the involvement of locals who can become the best stewards of their river. 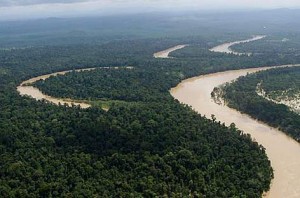 “The project has made great strides in bringing life back to the Kinabatangan River, and has positively impacted the local communities in the floodplains,” said Zainun Nur Abdul Rauf, a corporate affairs executive director for Nestle. The replanted areas now serve as natural buffer zones against land erosion, while they can also help rejuvenate the areas’ aquatic ecosystems and filter out pollution from the river’s water.

Many local villagers have been spearheading the project’s reforestation initiatives. Members of a local organization called KAPOK (Komuniti Anak Pokok Kinabatangan), who come from four villages by the river, grow tree seedlings for replanting and have assisted in planting hundreds of thousands of trees over the last few years in Kinabatangan. “We want to see the trees again, like how things used to be. There used to be a lot of deforestation around this area. It is a lot better now,” Aznan Awang, a member of the group, told Star2.com.

And efforts at sustainability do not stop there. Project RiLeaf also seeks to promote eco-friendly agricultural practices in communities along the river’s banks by encouraging local farmers and palm oil cultivators to shun harmful chemical fertilizers and pesticides in favor of natural ones. Smallholders who do so can earn Roundtable on Sustainable Palm Oil (RSPO) certification for their crop.

Meanwhile, replanting will carry on unabated. Participants in Project RiLeaf intend to plant 200,000 trees along the river in coming years. Good on them!