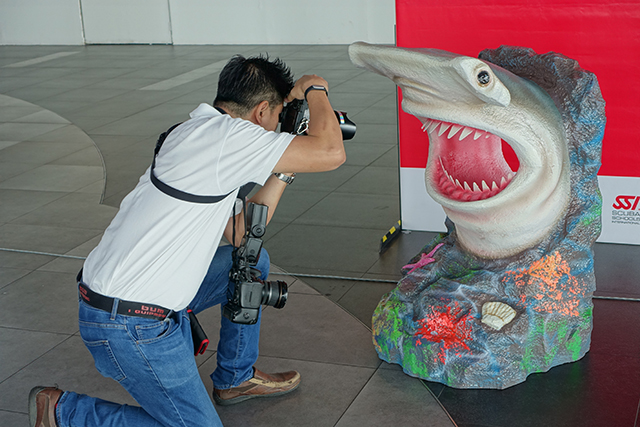 Considered dangerous and plentiful by many Malaysians, sharks are in fact the exact opposite: harmless and endangered. Photo Credit: Wong Wee Liem

Question: Why did the shark cross the road? Answer: To get to the other tide!

Now if only people made jokes (even bad ones) about sharks rather than be scared of them. Sharks’ bad reputation certainly doesn’t help them when it comes to consuming their fins. Though obviously, shark’s fin soup is (still!) considered a status symbol rather than “let’s eat it because sharks are so nasty!”

According to FAO (2015), between 2000 and 2011, Malaysia imported an average of 1,172 tonnes of shark’s fin, worth US$3.2 million (approximately 14 million Ringgit) each year, and recorded an average capture production of 23,412 tonnes per year of sharks and rays (though not necessarily for their fins) <note: export figures are not indicative of producer status as they include re-exports>.  These figures have earned it a place as the world’s third largest importer of shark’s fin and ninth biggest shark producer.

That’s why dispelling myths, fears and ignorance about sharks and the human threat to them is important, reckons the Marine special interest group of the Malaysian Nature Society Selangor Branch (MNS Marine). And that’s why this June 3–6, MNS Marine is making sharks their focus at their World Oceans Day marine awareness programme in Pulau Tenggol, Terengganu.

Sharks have been a component of the programme since it started in 2003. The programme imparts snorkeling skills training and marine ecosystem knowledge to members in a fun and informative way. The aim is for them to enter the sea without harming themselves or the coral reefs and their inhabitants, whilst appreciating the ecosystem too. 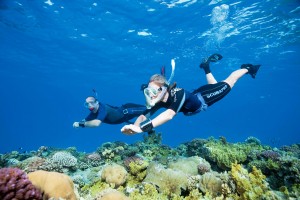 Snorkeling skills can be developed to a high level and allow for environment-friendly appreciation of sharks and reefs.
Photo Credit: SSI

This year, MNS Marine is ramping up the offering by including a Shark Specialty Course, in addition to snorkeling skills training and marine ecosystem knowledge. The interactive course will be cover shark biology, sharks’ role in the ecosystem, public perception of sharks and trade in sharks and shark’s fin. Participants will be certified for both the Shark Specialty Course and the Snorkeling Course by Scuba Schools International (SSI), who are also sponsoring the courses.

Armed with this education, participants will be on the lookout for sharks as they practise their snorkeling skills – able to fully appreciate them with their newfound knowledge. Pulau Tenggol not only has rich coral reefs but sites where sharks can be observed almost all the time; snorkelling is in fact one of the best ways to see these fish. 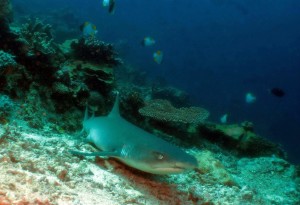 As you can see from this picture, sharks are not out to get swimmers and scuba divers.
Photo Credit: Sipitscuba/Tan Lea Meng

The programme is part of the multi-NGO My Fin My Life anti-shark’s-fin-soup campaign, of which both MNS Marine and SSI are partners.

“Malaysia is the world’s third-largest shark’s fin importer in volume, according to a 2015 FAO report,” says MNS Marine Coordinator Wong Wee Liem. “Most of that is consumed locally. But times have changed. Shouldn’t we evolve with the times and more importantly, the knowledge?”

SSI master instructor Tan Lea Meng agrees. “A lot of people out there, especially non-divers, still think humans are sharks’ favourite food. They still believe there are a billion sharks in the ocean, that they are dangerous to humans, so they should die. They still think a small bowl of shark’s fin soup does no harm. We should all save our marine ecosystem and stop the cruelty of shark finning.”