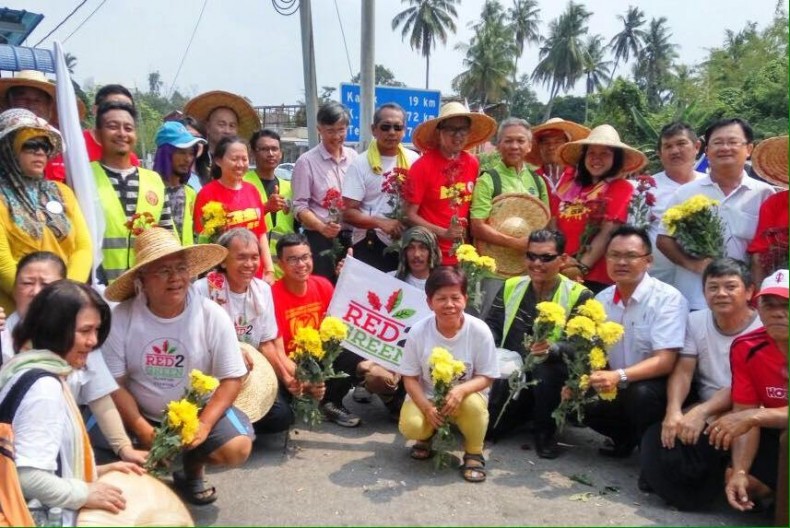 Members of the Pahang environmental group Red2Green pose for a picture en route to Parliament during their protest walk. Photo Credit: Red2Green

As the three-month moratorium on bauxite mining is nearing its end, Pahang’s government is scrambling to repair its image. When the extent of harm to Kuantan’s  environment – water, soil, air – became widely known, the state’s Menteri Besar Adnan Yaakob ended up with plenty of egg on his face. He refused to take responsibility, but he is now clearly trying to position himself as a reliable custodian of the state’s environment. 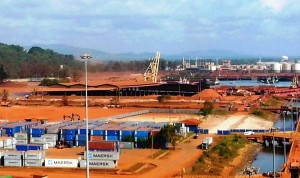 Adnan has just proposed new routes for transport trucks to Kuantan Port, in addition to a new location for stockpile centers. Both are meant to ensure that there will be no repeat of an environmental calamity in Pahang. Local environmentalists, however, aren’t convinced that without strict new regulations and rigorous enforcement of them the state’s authorities will be up to the task of preventing another environmental meltdown once mining resumes on schedule after the end of the temporary ban on April 15. They have called on Natural Resources and Environment Minister Dr Wan Junaidi Tuanku Jaafar to extend the mining ban.

Adnan says he would be fine with an extension. “We have submitted the new regulations and guidelines, and are prepared for any eventuality if the federal government plans to extend (the moratorium) we will accept the decision,” he said. “It is up to them to decide.”

Wan Junaidi has said his ministry is monitoring the progress of local miners in adhering to stricter regulations and will soon decide whether to extend the ban. “We have set several conditions for the industry players to comply with, including Standard Operating Procedures (SOP) at several places, including at port, for transportation and at the mining area,” he said.

Thirty members of the Pahang-based environmentalist group Green2Red recently completed their 350km protest walk from the state to Parliament, where they presented lawmakers with their memorandum. “We are not asking to stop the mining; we just want them to introduce better regulations for it. The most important thing is that it does not affect the public and we don’t want our children to face the pollution,” a representative of the group explained. “We want the government to realise how the locals in Kuantan have suffered due to the uncontrolled bauxite mining there.”

Bauxite mining is a major source of revenue for the state and many locals in Pahang. With exports from Malaysia down owing to the temporary mining ban, however, Australia has replaced the country as the leading exporter of the mineral to China. Malaysia became a major exporter of bauxite to China in 2014 by taking advantage of a gap in supply after Indonesia banned its own bauxite exports earlier that year.