Let’s Save the Majestic Hornbills 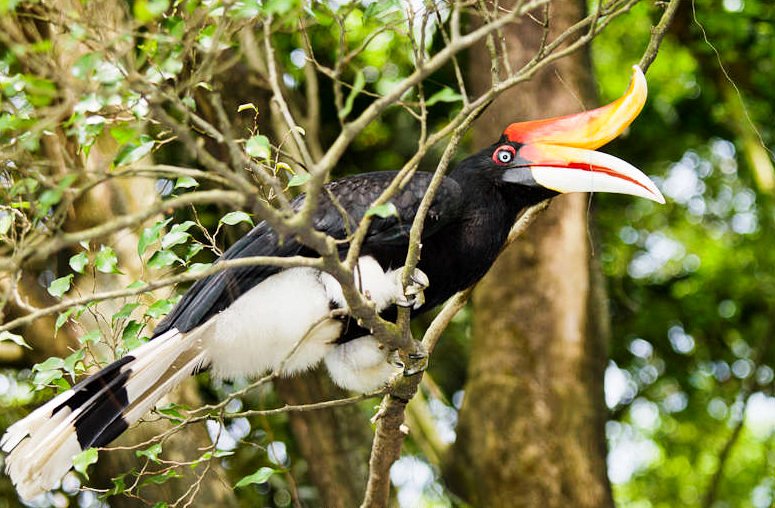 A rhinoceros hornbill perches in a tree in Malaysia. Photo Credit; Wikimedia Commons

Hornbills, as their very name suggests, are gaudy birds distinguished primarily by their enormous curved beaks with a protruding crest atop their upper mandibles. Known as a casque, it is a wedge of keratin – the same substance that forms human hair and nails – which male hornbills use primarily for display and sometimes for butting heads in flight during grandstanding bouts of combative machismo to attract the attention of females.

Unfortunately for the critically endangered birds, their flamboyant appendages have also attracted the attention of a less welcome breed: wildlife traffickers. While catering to increasingly great demand in China for what has been dubbed “red ivory,” international criminal syndicates have been after the beaks of helmeted hornbills, so named for their massive helmet-like casques, and other species by peddling them as an alternative to traditional ivory. And so, in the forests of Malaysian Borneo, where some of these rare birds make their home, hornbills are at increasing risk of falling prey to local poachers may shoot the birds on sight in expectation of a windfall from traffickers. 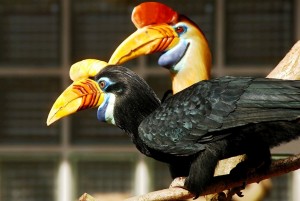 And the death of any male bird can be a tragedy because female hornbills are monogamous, routinely mating for life and producing only one or two chicks a year. This a female does do by sealing herself into a hollow of a tall tree and relying on her male partner to provide food through a small opening. Males also provide females and their chicks with protection against predators. Bravely feisty though male hornbills may be, however, there’s little they can do when they come up against human poachers armed with guns.

The situation is dire. The rare and majestic birds enjoy full protection under the Wildlife Protection Ordinance of 1998 in Sarawak state, which is home to eight out of the 54 species of hornbills in the world, including the rhinoceros hornbill, the wreathed hornbill and the black hornbill, and where their habitats largely fall within national parks, nature reserves and wildlife sanctuaries: Piasau Nature Reserve, Gunong Mulu National Park, Tanjung Datu National Park and Batang Ai National Park. The penalties for killing, hunting, capturing, selling, or trading the animals, or else possessing any recognizable body parts of them can entail three years in prison and/or a fine of RM25,000.

Yet over the past few years thousands of hornbill casques have been seized internationally, with the birds having been snatched from the forests of Sumatra and Borneo. Indonesia is facing especially acute problems in trying to save its remaining hornbill populations in the wild. Chinese authorities have recently pledged to step up their efforts to clamp down on international trafficking in ivory and rhinoceros horns, but conservationists now fear that criminal syndicates will respond by targeting hornbills even more in Malaysia and Indonesia.

In 2013 alone, according to findings by Yokyok Hadiprakarsa, director of the Indonesian Hornbill Conservation Society, at least 500 adult helmeted hornbills were killed every month in the Indonesian province of Kalimantan. That translates into 6,000 birds in a single year. The conservationist has described the trend as “horrifying” and warned that traffickers are increasingly targeting vulnerable birds for their “red ivory” to replace elephant ivory. “Shifting to hornbill ivory is like grabbing a low-hanging fruit,” he told the New York Times.

Charlotte Davies, a crime analyst at the green NGO the Environmental Investigation Agency, concurs. “Criminals can be opportunistic and will exploit legal loopholes as well as create new markets, so enforcement needs to keep up,” she noted. 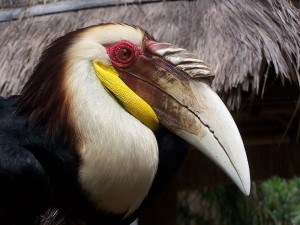 The wreathed hornbill, which also lives in Sarawak, is quite a looker. Photo Credit: Wikimedia Commons

The loss of even a single species of hornbill would be incalculable in Sarawak, as it would be elsewhere. The state’s very emblem is the magnificent rhinoceros hornbill, known locally as burung kenyalang. The local Dayak people have traditionally treated the large birds reverentially, taking them to embody the divine spirit. But for at least two millennia locals have also been carving the birds’ casques into ornaments, from jewelry to belt buckles to figurines, believing hornbill carvings to signify wealth and status. This trend has also caught on in China, today’s epicenter of the illegal trade in “red ivory,” which is now endangering the very survival of several hornbill species in the wild in Indonesia and Malaysia.

What with extensive habitat loss and intensifying attempts to capture them by poachers across the region, hornbills are being driven ever closer to extinction. Conservationists estimate that some of the species might be a mere three generations away from extinction as the long-lived animals’ slow reproductive cycle exposes them to ever graver dangers in the face of poaching. Take a minute to reflect on that: within a few short years some hornbill species might be gone from the wild.

To stop that happening, the beleaguered birds have been granted the highest level of protection under the Convention on International Trade in Endangered Species of Wild Fauna and Flora (CITES) with no commercial trade allowed in them. That, however, has not stopped unscrupulous operators from hunting the birds for their casques, which can fetch exorbitant sums on the black market. Helmeted hornbills are especially at risk, thanks to their majestic beaks and their vivid color combinations.

“This really is the greatest challenge, but also the greatest opportunity, in saving the helmeted hornbill,” said Chris Shepherd, the regional director of the anti-wildlife trafficking watchdog TRAFFIC. “The tools are in place to do something about this trade.”

The solution: 1) Enforce wildlife laws and prosecute lawbreakers, including those Malaysians who were recently found to offer “red ivory” for sale on social media; 2) Establish community-based conservation projects in Sarawak to protect native hornbill species; 3) Tackle the problems at source by eliminating demand for “red ivory” in China; and 4) Protect the birds’ natural habitats by saving rainforests from further harm and degradation.

So are all other hornbills, and we can’t afford to lose any more of them.