Cambodia’s Tigers are Extinct. Will Malaysia be Next? Not if We Act 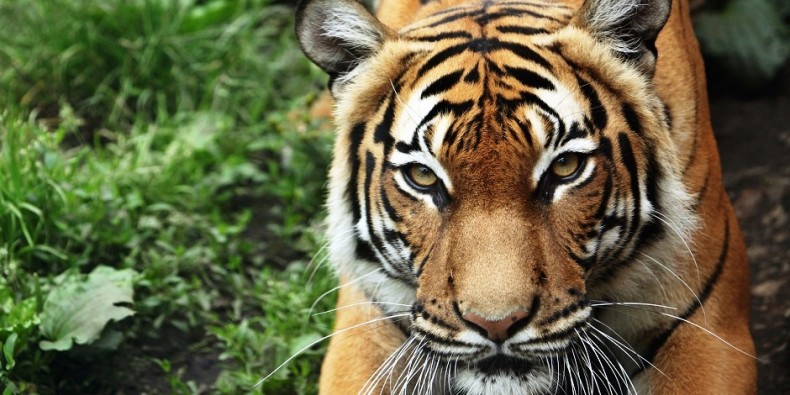 The Malayan tiger will all the need it can get from us. Photo Credit: MyCat

This time, though, it has happened in Cambodia. Once tigers roamed much of the nearby Southeast Asian nation. Now they’re all gone – or, as biologists put it, “functionally extinct” with no breeding populations left in the wild. Tigers in Cambodia have “been hunted to extinction because of weak law enforcement,” noted Suwanna Gauntlett, of the green group Wildlife Alliance.

That, too, should sound familiar. Will Malaysia be next in seeing its wild tigers dwindle down to so few in number that they will no longer have a chance of pulling through? The risk is certainly there. There might be only as few as 250 tigers left in Malaysia’s forests and this year alone six tigers have already been lost: three to poachers and a pregnant mother with two unborn cubs in a road accident.

In a desperate bid, Cambodia, where a wild tiger was last spotted on a camera trap almost a decade ago, in 2007, plans to reintroduce tigers in coming years into a protected patch of forest in a relatively remote area. “We want two male tigers and five to six females tigers for a start,” said Keo Omaliss, director of the Department of Wildlife and Biodiversity at  Cambodia’s Forestry Administration. “This is a huge task.”

Along with Malaysia, Cambodia is among the 13 countries in the world with tiger ranges (the other countries are Bangladesh, Bhutan, China, India, Indonesia, Laos, Burma, Nepal, Russia, Thailand and Vietnam). The 13 nations have recently pledged to double the number of wild tigers by 2022 to stop these beleaguered big cats from becoming extinct. Every single one of these countries, including Malaysia, will be facing an uphill battle, however. “There will be no room left for tigers and other wildlife in Asia without a more responsible and sustainable program for economic growth and infrastructure,” World Bank president Robert Zoellick warned. “The tiger may be only one species, but the tigers’ plight highlights the biodiversity crisis in Asia,” he added. 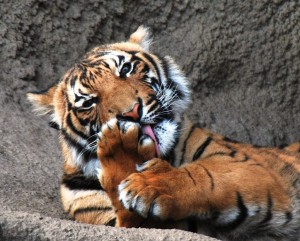 A captive Malayan tiger does a bit of self-grooming. Photo Credit: Ted via Flickr

According to estimates, tigers around the region have lost a staggering nine-tenths of their natural habitats over the decades. Malaysia lost more than 14% of its forest cover just between 2000 and 2010, in what was the highest rate of forest loss in the world, according to Global Forest Change. And the loss of their habitats have entailed the loss of many of tigers’ natural prey across the country, primarily sambar deer. Around Asia, within the past century tigers have also seen their numbers plummet from an estimated 100,000 to a mere 3,900 or so. Two Indonesian subspecies, the Javan tiger  (Panthera tigris sondaica) and the Bali tiger (Panthera tigris balica), have gone extinct entirely.

In Malaysia, the government pledged to boost the number of wild tigers around the country to 1,000 by 2020. That was back in 2008. Clearly, the plan has not been working out all that well: eight years on the number of wild tigers now stands between a mere fourth and, at best, a mere third of that figure (somewhere between 250 and 340 animals). The reasons behind the relentless loss of wild tigers have been the usual culprits: deforestation, human encroachment and poaching. In this new century alone, as many as 100 Malayan tigers (Panthera tigris jacksoni) may have been killed by poachers around Malaysia, based on estimates by the wildlife-monitoring group TRAFFIC. And that’s a conservative estimate with the actual figure likely being higher.

Time to despair? Not just yet. But there is no more time to waste if Malaysia is to avoid the fate of Cambodia. In 2009, the Malaysian government committed itself to a comprehensive action plan to save the country’s emblematic species: from expanding tiger refuges to linking fragmented forests with green corridors and from enacting new wildlife laws with far harsher penalties to clamping down on poaching. Progress in such areas has been made but barely just.

“Strong leadership, coordination, communication and monitoring are keys to the success of the plan,” said Dr Kae Kawanishi, a tiger biologist who is general manager of the Malaysian Conservation Alliance for Tigers (MYCAT), a coalition of four major conservation groups: the Malaysian Nature Society, TRAFFIC, Wildlife Conservation Society-Malaysia Programme, and WWF-Malaysia. “Although improvements have been made in a number of actions, the overall level of implementation has been unsatisfactory. This culminated in the continued loss of tigers and natural forests,” he went on to point out.

In a new petition, for which it’s been seeking 100,000 signatures by Global Tiger Day on July 29, the alliance demands several immediate actions. These include harsher penalties for poaching and wildlife trafficking to serve as deterrents as well as far more effective forest protection mechanisms to defend tiger ranges against further logging and human encroachment. Stepped-up enforcement efforts will also be vital. Unscrupulous poachers, both native-born and foreign, continue targeting Malaysia’s exotic wildlife with callous brutality and unrelenting zeal. Between 2010 and 2013 alone, a total of 1,728 illegal camps and more than 2,240 traps and snares were discovered in protected forests, according to TRAFFIC’s program manager Kanitha Krishnasamy. 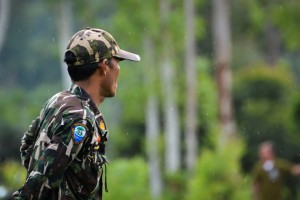 Wildlife rangers are on the frontlines against poachers. Photo Credit: Alex Walsh via WWF

Understaffed and underfunded, wildlife officials are often unable to keep up with routinely better armed and equipped poachers. “If the budget is not there, no patrols can be done. If the price of a dead tiger is so lucrative, poachers will do anything to hunt them,” stressed Melvin Gumal, director of the Wildlife Conservation Society. “Poachers have stepped up their efforts. We cannot afford not to increase enforcement.”

Anti-poaching units will need not only plenty more rangers but plenty more bite as well to protect tigers and other endangered species of wildlife. “We need to have armed enforcement and military personnel protecting the forest interiors, and then flood the edges and easily-accessible areas with citizen conservationists and tourists,” Krishnasamy said.

If they receive the help that they need from us, Malaysia’s tigers may yet live to fight another day. “Biologically, it is possible for the population of 300 Malayan tigers to bounce back to 500 and eventually to 1,000,” Kawanishi said. “Malaysia has enough forests to support up to 1,500 tigers,” he elaborated. “That can be done by integrating biodiversity conservation into the state governments’ decision-making processes regarding resource extraction, especially forestry.”