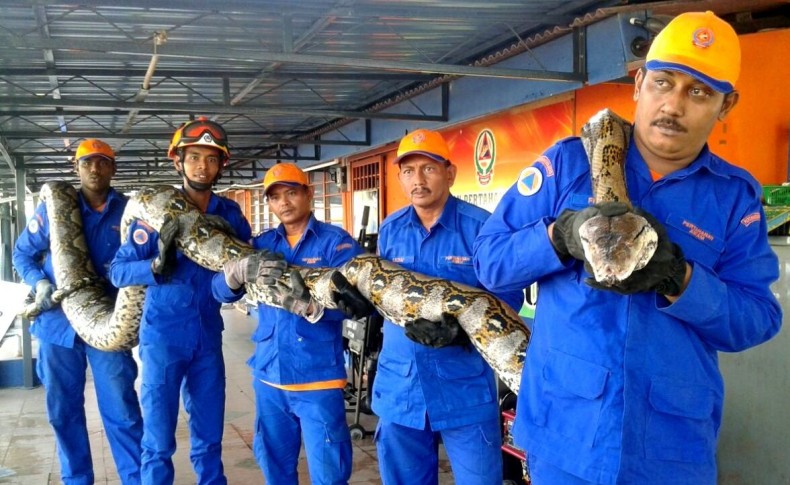 Construction workers at a building site for a flyover in Paya Terubong on Penang came across something truly extraordinary – a giant python. And not just any python either but possibly the longest python ever caught alive: she measured around 8 meters in length and weighed around 250kg.

The pregnant female, a reticulated python, was found under a fallen tree and taken captive by Emergency Services staff. She died a few days later, but not before she managed to lay a single egg. Herme Herisyam, operations chief for Penang’s Civil Defence Department’s southwest district, said it wasn’t clear why the snake perished. We might hazard a guess: presumably people rough-handling and even kicking her, as they can be seen doing in a video, did not help. That, and stress from being caught while giving birth might have led to her demise. 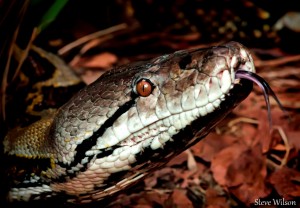 After discovering the snake, the construction workers proceeded to pose for several pictures with her, tagging at her and lifting her up onto their shoulders. The giant snake instantly became a public attraction and put on display at  the Civil Defense Department’s operation centre in Bayan Lepas before she died.

““The most likely reason (for the snake’s death) is injuries sustained when caught or after being caught,” Raymond Hoser, a snake-handling expert, told Britain’s Guardian. “Snakes are relatively delicate animals.” While being handled, the snake might have struggled, possibly leading to internal injuries.

The reticulated python (Python reticulatus), so named for the beautiful gridded pattern on their skin, is endemic to Southeast Asia and is among the largest snakes in the world. They tend to be longer than anacondas but generally less robust. Reticulated pythons prefer to live near fresh water sources and are very good swimmers, which has enabled them to colonize smaller islands around the region. They are fairly common across Malaysia and are kept as pets by snake enthusiasts worldwide.

Like all pythons, they are constrictors, killing their prey by squeezing them to death. They are ambush predators and largely feed on birds and smaller mammals, but they can also take down wild boar and deer, swallowing their prey whole, hoofs, antlers and all. Females tend to be longer than males and lay up to 80 eggs at a time. Newborns are about 70cm long and start hunting mice, birds and lizards pretty much the moment they hatch.

The previous record holder as the world’s longest snake in captivity was Medusa, a reticulated python in Kansas City, in the US, which is 7.67 meters long and weighs around 160 kilograms. In 1912, a 10 meter-long reticulated python was shot and killed in Sulawesi, in Indonesia.