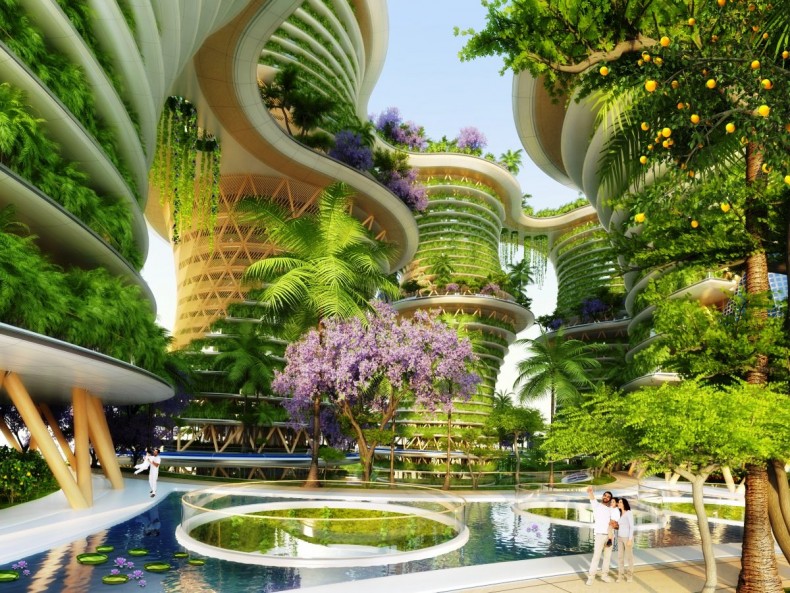 What with space at ground level becoming scarce in overpopulated urban environments, the way for cities to go is up. And up they will continue to go in decades to come, but this time in true green style if plans for eco-friendly “vertical” neighborhoods are anything to go by.

One such plan envisions an eco-friendly urban village with six towers, each 36 stories tall. The Hyperions garden tower project, which has been conceptualized for the satellite city of Jaypee outside New Delhi, would feature plenty of green spaces, cascades of vegetation and leafy sky footbridges and walkways. Designed by Indian ecologist Amlankusum and the French architectural design firm Vincent Callebaut Architectures, the complex would be a model of sustainable living with optimal energy-efficient facilities and a limited environmental impact.

Its earthquake-resistant substructure would be built from steel and concrete, but its superstructure would consist of locally sourced solid wood. All of the complex’s energy needs would be produced on site with wind turbines and solar panels embedded into the structures’ facades. 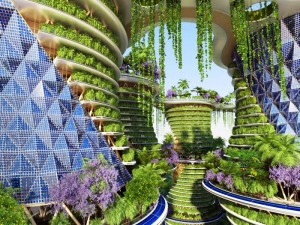 Vegetation would cascade down high-rises in a vertical forest of sorts. Photo Credit: Vincent Callebaut Architectures

“In collaboration with architects, agricultural engineers, agronomists and farmers, I eco-conceived this garden towers project … with the double objective of energy decentralization and food deindustrialization,” explains Amlankusum. “My approach is holistic, combining the best of low-tech and high-tech instead of systematically opposing them. Our aim is to reconcile urban renaturation and small-scale farming with environment protection and biodiversity.”

As extensive human encroachment has denuded the surrounding countryside of its natural beauty and resources in an “ecocide,”  Amlankusum envisions an organically constructed “nature-city” to restore some natural balance to the area in a seamless blend of vegetation and architecture. Outward-facing living spaces would all come with hydroponic green balconies; rooftops would be flush with lush gardens, which would be irrigated with recycled water. A ‘phytopurification lagoon’ at ground level would serve as a fresh water source and as a scenic gathering place. The self-sufficient community would grow its own food, thanks to aquaponic balconies where fruits and vegetables could be cultivated.

Sounds great, but such projects are little more than castles in the sky you might think. But you would be wrong. Several similarly ambitious futuristic green cities are already underway worldwide. One of them, called Forest City, is being built on four reclaimed islands in Johor. Touted by the developer as a “role model of future cities,” Forest City will sprawl on 1,386 hectares and serve as an urban oasis with vertical greenery, advanced green technological features and sustainable modes of transportation, according to its Chinese developer.