Saving Malaysia’s Peatlands is a Must 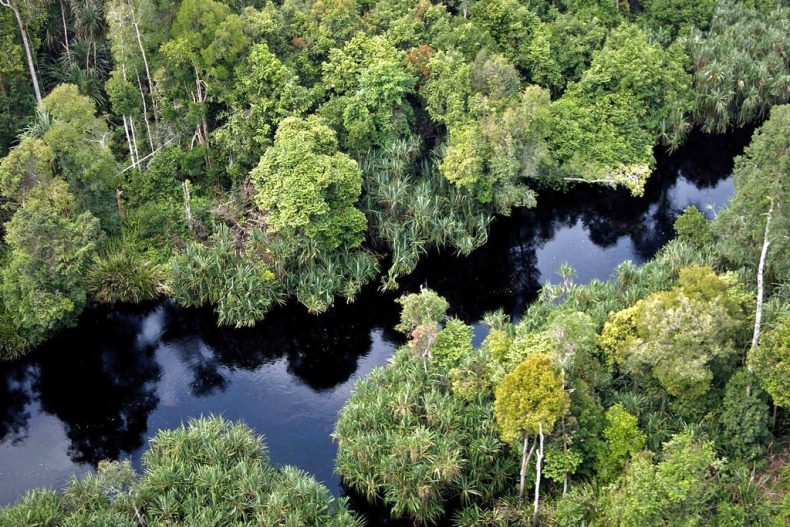 You may think of peat swamps as but inviting stretches of foul-smelling territory. That they may well be, yes, but they are far more than that. Peat swamps are home to a great deal of biodiversity with a fascinating kaleidoscope of species.

Better yet: peat bogs are excellent absorbers of carbon dioxide. With their soil made up of predominantly organic matter, the world’s peatlands store twice as much carbon dioxide, one of the climate-changing greenhouse gases, as its forests: an estimated 550 gigatons, to be precise. Peat swamps in Malaysia may store up to 20 times more carbon than adjacent lowland forests.

So you might be forgiven for thinking that Malaysia, a country that seeks to reduce its greenhouse gas emissions, preserve its biodiversity and tackle its fresh water problems, is sorely in need of peatlands. It is. Yet that has not stopped the country from allowing its peatlands to fall victim to relentless encroachment from farmers, developers and oil palm cultivators.

Not only that, but many peatlands aren’t simply drained and cleared bit by bit, which would be bad enough. Instead, they are torched down wholescale in periodic bouts of slash-and-burn, which wreaks havoc with local ecosystems and poses serious health hazards to locals from the effects of raging wildfires or long-smoldering ones. And when the peatlands burn, all that carbon dioxide stored in them gets released into the atmosphere, too.

Peatlands take thousands of years to grow, during which time layers of peat can accumulate to depths of anywhere from a few meters to 20 meters. Their damp, highly acidic soil, which is almost devoid of oxygen, slows down the decomposition of organic matter considerably; so much so that plant and animal remains can stay preserved for hundreds, and often thousands, of years with the carbon contained in them locked safely away from the atmosphere.

Burn the forest down or drain the swamps, however, and you risk releasing all that carbon back into the atmosphere. Peat bogs are “key areas for carbon storage,” Marcel Silvius, a climate/smart land-use specialist at Wetlands International, told the Smithsonian Magazine. “If we treat them badly, drain them and dig them up, they become major carbon chimneys.” 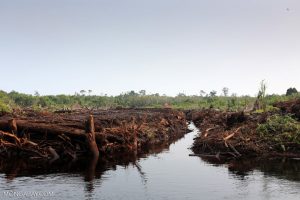 The decimated remains of a peat forest make for a heart-wrenching site. Photo Credit: Mongabay

And it’s not just the climate that suffers, needless to say. Once the fires have done their work, what frequently remains is a large swathe of apocalyptic landscape with the lives of its myriad threatened and endangered plants and animals extinguished. Within the blink of an eye, callous or careless human activity can undo what Nature has taken thousands of years to build. And in the place of what was once a great natural jumble of thriving ecosystems will grow serried ranks of palm trees at anodyne, man-made plantations. A tragedy, yes.

As for its scale, consider this: Over the past two decades, the proportion of peat swamp forests in Peninsular Malaysia, Sumatra, and Borneo has dropped from 77% to a mere 36%. And of the few remaining peat forests, fewer than 10% are within protected areas. In Sarawak alone, according to Wetlands International, giant swathes of peatlands have been converted into oil palm plantations since 2005.

“Unless this trend is halted, none of these forests will be left at the end of this decade,” the group has warned. In just five years between 2005 and 2010, Wetlands adds, citing independently obtained satellite imagery, almost 353,000 hectares of highly biodiverse peat swamp forests were lost to palm oil production in the state.

Within that short time, the group notes, “almost 10 percent of all Sarawak’s forests and 33 percent of the peatswamp forests have been cleared. Of this, 65 percent was for palm oil conversion.” Wetlands estimates that the 510,000 hectares of peatlands that were drained in Malaysia for palm oil production caused the release of 20 million metric tons of carbon dioxide every single year.

Malaysian conservationists are well aware of such alarming statistics. “Sarawak used to have about 1.6 million hectares of peatland. The state lost about 100,000ha of it to oil palm plantation by the early 2000s,” Mohideen Abdul Kader, vice-president of Sahabat Alam Malaysia, pointed out. “The Sarawak government must stop approving conversion of peatland into plantation.”

Upreshpal Singh, director of Friends of the Orangutans and a leading conservationist, has seconded that call. Singh insists that peatlands’ unique ecosystems must be preserved at all cost for the sake of not only their inhabitants but the entire country as well. “Over-development from peatland clearing causes severe environmental impact,” he says. “The building of drainage canals at the expense of peatland has taken a toll on Mother Nature.

So have fires and relentless forest clearing. We must stop them all.

Tags: conservation and biodiversity, global warming and carbon storage, loss of peat land in sarawak, the importance of peat swamps