The World is getting Warmer … and Greener – for Now

Rainforests thrive on carbon dioxide, but that does not mean we should keep pumping more and more of it into the atmosphere. Photo Credit: Flickr

All those massive amounts of carbon dioxide we have been belching into the atmosphere have been creating a greenhouse effect, turning up the thermostat worldwide. But here is something else they have been doing: turning plants greener.

Does that sound counterintuitive? Perhaps it should not. Plants thrive on carbon dioxide and so the more of the gas there is in the air for them to absorb, the more many plants might be expected to flourish. And that’s exactly what they have been doing, according to an international team of researchers from eight countries and two dozen institutions, who have just published their findings in a study “Greening of the Earth and its Drivers” in the journal Nature Climate Change.

Having scrutinized satellite data from the past 33 years, the researchers have found that rising levels of carbon dioxide have been helping plants turn greener by sprouting plenty more shoots and leaves. “We were able to tie the greening largely to the fertilising effect of rising atmospheric CO2 concentration by tasking several computer models to mimic plant growth observed in the satellite data,” said Ranga Myneni, a researcher at Boston University, in the US. 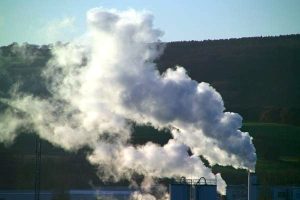 Carbon dioxide can be useful, but not in the vast quantities that we keep pumping it into the air. Photo Credit: FreeFoto.com

And it’s not just that plants have been growing new leaves but that they’ve been spreading fast far and wide, fuelled by all that CO2 in the atmosphere. Just how much greening of the planet has there been? Quite a bit, according to the researchers. It amounts to an area twice the size of the continental United States: some 18 million square kilometers. Thanks to the sustained growth spurt over recent decades, vegetation now covers about 85% of all ice-free land, or roughly a third (32%) of the planet’s total surface area.

That sounds like excellent news. There’s lots and lots of CO2 in the air (we pump another 10 billion tons of it into the atmosphere each year), but all this new vegetation will absorb much of it, so problem solved, right? Not so fast. Scientists are warning that this greening, or so-called “fertilization,” effect of excessive amounts of airborne carbon dioxide is bound to wear off soon. Plants will simply acclimatize to the increased levels of CO2 concentrations in the air, and that’ll be that for the greening effect.

So let’s just keep Malaysia’s remaining forests intact, shall we?

Tags: global warming and climate change, greening the planet, levels of carbon dioxide in the atmosphere