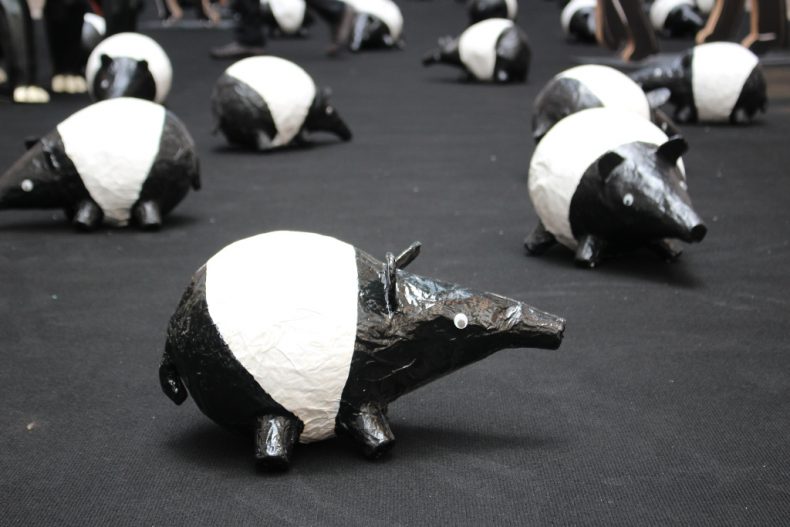 Malayan tapirs need all the help they can get. They are getting some of that help from schoolchildren across Malaysia who have created thousands of miniature clay figurines in the image of the endangered animals.

The children did so as part of the Malayan Tapir Awareness Campaign in order to bring attention to the risk of extinction faced by the placid herbivores in the country’s forests. Each of the clay animals represents one of the 3,000 Malayan tapir left alive today. The figurines have gone on show at an art exhibition in an upscale shopping mall in Kuala Lumpur, where awareness-raising activities for children included performances, face-painting and the sale of tapir-themed toys and other merchandise.

Malayan tapirs (Tapuris indicus) are the largest of four tapir species in the world, known locally as cipan or tenuk. The black-and-white animals grow to around 1.8 meters in length and 350kg in weight. Only en estimated 1,500 of them remain in the wild in Peninsular Malaysia, while hundreds more cling on around their ranges on the island of Sumatra in Indonesia and parts of southern Thailand. Adult tapirs lead largely solitary lives in dense forests near rivers. They are good swimmers.

In recent decades the herbivores have fallen prey to game hunting and seen their habitats shrivel because of extensive deforestation fuelled largely by oil palm plantations. Several of them have also perished in road accidents in Malaysia after the animals left the relative safety of forests and wandered onto roads and into populated areas, driven most likely by the steady loss of their original habitats. Between 2010 and 2015 at least 35 tapirs perished in such accidents.

The government is working on a “Safe Tapir Crossing” initiative by increasing the numbers of wildlife crossings within the animals’ ranges and warning motorists of their potential presence within forests in states like Johor, where the animals live. Plans are also underway to relocate wild tapirs at risk to safer forest havens and to boost their numbers in captive-breeding programs. As part of that latter effort, Malaysia has loaned out tapirs to several foreign zoos, thereby seeking to emulate the success of global captive-breeding projects for giant pandas.

All four tapir species in the world are endangered, the other three being the lowland tapir, the mountain tapir and the Baird’s tapir. World Tapir Day on April 27 serves to raise awareness of the animals’ plight.