Take a glimpse at a picture of Earth from outer space, and you will see what looks like a multicolored marble with lots and lots of blue on it. That’s no surprise: the planet’s surface (all 70% of it) is covered in water. Now, what if we could use some of that vast sea surface area for sustainable projects – such as floating giant solar panels on it?

That, in a nutshell, is the idea behind Austrian scientists’ Heliofloat, a floating lightweight platform the size of a football field that is packed with solar panels for generating electricity with no cost to the environment.

Engineers at the Vienna University of Technology have designed the platform with open-bottomed cylinders so that it can withstand heavy waves, an important consideration on perennially choppy seas. The floats are filled with compressed air and designed to absorb shock from waves, allowing the platform to remain relatively stable by weathering storms like buoys.

“The key to this, is that Heliofloat is supported by open floatation devices,” lead researcher Markus Haider explained. “Were a platform to be simply mounted onto air-filled, closed containers, the design of the construction would have to be inefficiently heavy and robust in order to be able to withstand heavy waves.” 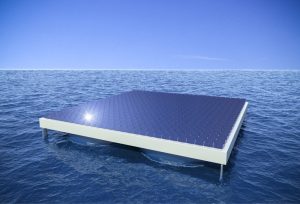 Solar energy is beautifully clean and infinitely renewable. The problem with it is that in order to generate enough of it for mass use, you need plenty of land area for endless banks of solar panels, which regularly makes it unfeasible in populated areas. Not so the surface of oceans: they’re there for the taking. The new technology can now potentially enable enterprising green energy companies to tap into some of all that available surface space in the seas and oceans by floating solar panels offshore.

The research team at the university has also designed concepts for harnessing the rays of the sun for energy generation through photovoltaics and parabolically shaped mirrored troughs. The platforms can also double as the sites for other offshore and waterborne projects, including desalination plants and biomass extraction processes for salt water.

In tropical countries like Malaysia, Heliofloat platforms could be used to protect lakes against drying up by reducing their surface area for water evaporation while still allowing sunlight to penetrate through the water in order to sustain aquatic creatures.