Rescued Sun Bears get a New Lease on Life 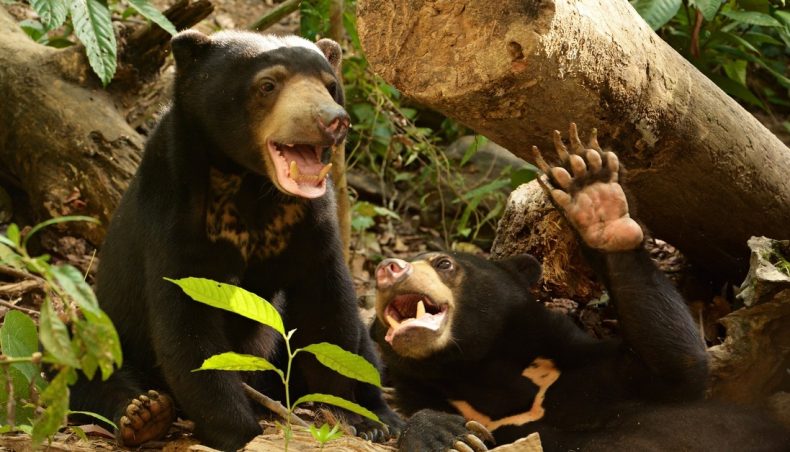 Two sun bears are living it up at the leafy grounds of the Bornean Sun Bear Conservation Centre. Photo Credit: BSBCC

Score another victory up for sun bear conservationism. After a months-long campaign, animal rights activists in Sabah have finally managed to rescue two captive bears from their bare confines at a  mini zoo inside a hot spring near the town of Tawau in Borneo. The animals, malnourished and visibly distressed, were held there in small cages without any enrichment tools or facilities for the amusement of visitors.

“Despite all the odds and challenges (e.g. political interference, threats),” noted Upreshpal Singh, director of Friends of the Oragutans (FOTO), a conservationist group that assisted in the campaign to secure the animals’ release from the Tawau Hot Spring Recreational Park, “the bears were finally removed from the park into a local zoo for quarantine and health checks.” 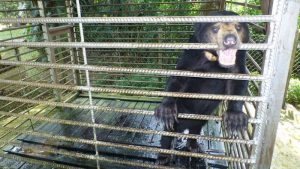 A sun bear bites at the bars of its cage in distress at the Tawau Hot Spring Recreational Park before its rescue from the site. Photo Credit: FOTO

After their health checks at the zoo, the Lok Kawi Wildlife Park, the two bears have now been transferred to the Bornean Sun Bear Conservation Centre (BSBCC), whose premises feature excellent animal care facilities and spacious leafy roaming grounds for resident bears. The bears, both of which are mature animals, will likely remain at the center as they would not be able to survive on their own in the wild after long years in captivity.

The plight of the bears recently attracted widespread attention. In a video posted on YouTube last September, the two bears can be seen pacing about despondently within their cages. Around the same time the international conservationist group One Green Planet began campaigning for the animals’ release while accusing park officials of providing insufficient care for the animals. It is against the law in Malaysia to keep endangered sun bears as pets.

Malayan sun bears (Helarctos malayanus), known locally as “beruang madu,” are the smallest bears in the world, growing to only around 1.5 meters in length and 70 kilograms. Thanks to their small stature, they are expert climbers in the dense forests that they inhabit throughout their range from eastern India to Indonesia to southern China and Vietnam. Their stocky build with their short muzzle and small ears has earned them the nickname “dog bears.”

Because of their penchant for honey, which they expertly scoop out of wild bee nests with their long agile tongue, they are also known as “honey bears.” Sun bears, which are so named after their bright-yellow patch on their chest, are largely nocturnal animals, coming alive at night to forage relentlessly for berries, fruits, roots, termites, insects and smaller animals.

Because of relentless habitat loss and poaching, sun bears have fallen on hard times throughout their range. They are often hunted out of the mistaken belief that their body parts have curative properties. Cubs are also taken from their mothers in the wilds so as to be sold as pets on the illegal wildlife market.