Sale of Bushmeat carries on in Sabah 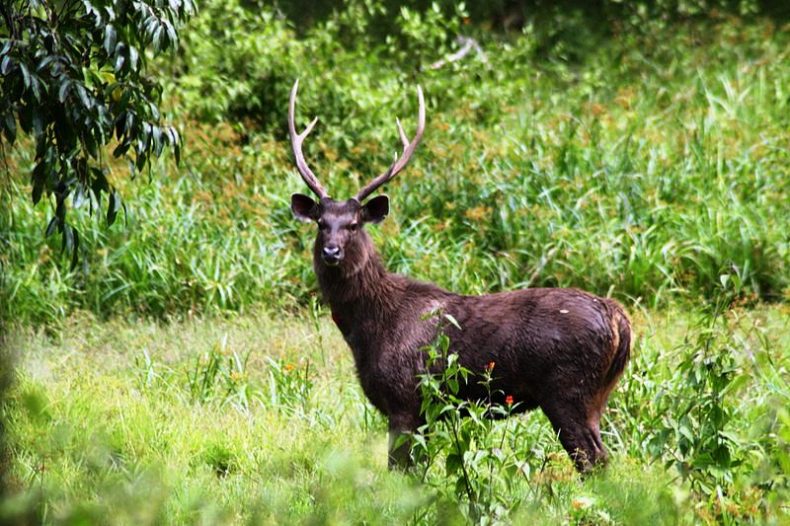 Sambar deer are highly prized for their meat by game hunters in Sabah, many of whom are happy to defy hunting bans. Photo Credit: Wikimedia Commons

Many locals in Sabah seem to view the state’s forests as their own backyards: the animals that inhabit those woods, these people apparently believe, are simply there for the taking – through the barrels of hunting rifles.

Reportedly, the bushmeat trade in the state continues to flourish despite a ban on game hunting. A citizen’s group that goes by the name of the Wildlife Watchers of Sabah has documented several examples of bushmeat on sale at roadside farmers’ markets in the district of Nabawan in recent weeks. Wild boars, barking deer, civet cats, pangolins – game hunters, if given a chance, will kill them all indiscriminately for their meat.

In response, officials at the Sabah Wildlife Department have reiterated their pledge to clamp down on game hunters. “We are going after the suppliers of bushmeat and we think this is the best approach in dealing with this problem,” said Augustine Tuuga, the department’s chief of enforcement. 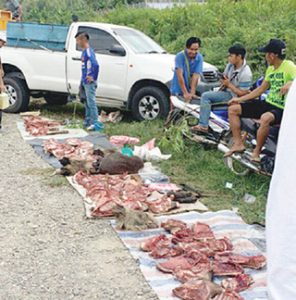 Locals in Nabawan sell bushmeat on the side of the road. Photo Credit: Daily Express

According to  the Wildlife Watchers of Sabah, however, there has so far been little sign of a crackdown by officials on the sale of bushmeat, despite the Wildlife Department’s promises to the contrary.

Complicating enforcement measures is the fact that not only is there great demand for bushmeat among locals, but that many of them do not consider game hunting to be wrong at all. There is also a risk, Augustine noted, that some of the bushmeat sellers might turn on wildlife officials or others if they are challenged over their possession of bushmeat.

They did just that last November, when a licensed hunter reported that he had been threatened by local bushmeat sellers for trying to take pictures of their fare in Nabawan. The meat being sold illegally at the time, he said, came from several protected species: sambar deer, barking deer, bearded pig, pangolin and porcupine.

“One of them pointed his finger at me and shouted: ‘Jangan kau ambi gambar kami di sini. Kalu tidak kami pukul kau!’ (Don’t take our photos here, or we will hurt you),” the man recalled in a media report at the time. “I sensed something was wrong when 12-15 men started to gather around us,” he added. “I quietly walked away. The last words that came out of his mouth was ‘If I meet you in the jungle, I will kill you!'”

William Baya, director of the Sabah Wildlife Department, acknowledged the problem posed by some locals. “We are having problems with these people,” he explained. “They are not cooperative and, worse, they don’t recognise our laws. They claimed that hunting is part of their culture.”

Be that as it may, their wanton disregard of wildlife protection laws cannot be allowed to go unchallenged. If it is, many endangered species in Sabah’s forests will be driven ever closer to the brink of extinction.