The Fiery Peats of Haze in Southeast Asia 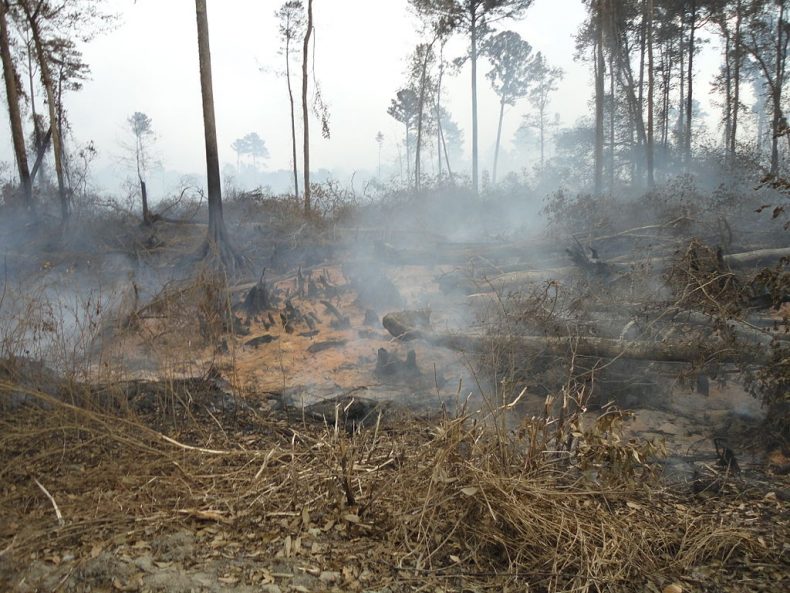 You would be forgiven to think that the haze is here to stay. After all, countries in Southeast Asia have been experiencing almost annual haze episodes since the 1980s. And despite increasingly desperate rhetoric from governments, NGOs and the public across the region to banish haze once and for all, haze continues to be a dry season staple.

What makes the haze problem such a difficult one to solve? The common assumption is that haze is a result of smoke from naturally-occurring forest fires, a natural phenomenon that is near impossible to curb or control. However, deeper study into the human factors surrounding these fires paints a picture that is quite contrary – and controllable.

Not all Smoke is Created Equal

It is correct that haze is a result of smoke from forest fires. However, not all forest fires are the same, and not all of them produce the same kind of smoke. This is the key to understanding the haze problem, and its solution.

There are generally three types of naturally-occurring forest fires in the region: brush, crown, and peat fires. Brush and crown fires are no big deal. Brush fires spread along low-lying vegetation, while crown fires burn the crowns of trees and tall shrubs.

They both spread at a relatively slow rate, and burn fresh vegetation. This ‘fresh’ fuel means that these fires usually produce light smoke that disperses easily. They also die out quickly because of the high water content of the vegetation.

Peat fires on the other hand are quite different. Peat itself is a very unique type of soil. Peat is commonly found along riverbanks and other coastal areas. Southeast Asian peatlands make up a whopping 60% of the world’s wetlands, and cover approximately 12% of the region’s land area.

Because of its proximity to water sources, peatsoil is characteristically waterlogged. Many species of trees and other vegetation also grow on this fertile soil. When these plants shed foliage and other organic material, this plant litter also becomes damp.

In normal, non-damp conditions, this plant litter will naturally decay, releasing carbon. However, the wet conditions in peatlands constrains decomposition, effectively also preserving the carbon within them. This accumulated partially-decayed litter can form a layer of peat up to 20 meters deep. Over time, the peat can be compressed to form coal.

Because of its ability to trap carbon this way, peatlands are highly effective carbon sinks, an important factor in keeping climate change under control. However at the same time, this carbon-rich soil is also a potentially dangerous firestarter.

If peatlands are left waterlogged as nature intended, the carbon in the soil will be kept safely locked away. However, problems arise when these lands are disturbed by humans, most often for agricultural purposes.

When a parcel of peatland has been earmarked for conversion, the first thing that must be done is to drop the peat’s natural water table. This is usually done by digging canals in the peat, to drain water from the top layer of the peat to nearby rivers or oceans.

Drainage exposes the normally damp peat to the air. This triggers the rotting process, and huge amounts of carbon are instantly released into the atmosphere. Hence, you will end up with a top layer of dry soil, and a deeper layer of still damp, carbon-rich soil below the new water table.

This is what makes disturbed peatlands so fire-prone. If a spark occurs here, either naturally (dry branches rubbing against each other, for instance) or manmade (a stray cigarette butt, or even intentional burning as a cheap way to clear vegetation), the dry, top layer will catch fire very easily.

And if this fire reaches the deeper, damper, carbon-rich layer, you will have a fire that is very difficult to detect, and even harder to put out. Contrary to brush and crown fires which burn above ground, a deep peat fire can spread great distances quickly underground by eating up the carbon-rich fuel.

Often, these underground fires are not even visible to the naked eye, but can be detected only through funnels of smoke rising from the ground at certain places. One of the only known ways to effectively put out these peatfires is by flooding the entire area. And since peatlands are often situated in remote areas, firefighting facilities are often inadequate or too far away to do so.

Peatfires produce quite a different type of smoke from brush and crown fires. The damp and carbon-rich deep peat burns ‘dirty’, belching out smoke that is particularly black, sooty, and thick.

This smoke does not disperse easily, and is able to travel great distances across national borders to envelop areas thousands of miles away. This type of smoke is the main component of the haze that we experience in this region.

Haze and your Health

Peatfires and haze affect us in many ways. The masses of carbon released into the atmosphere during the draining of peat speeds up climate change. The murky air blocks out the sunlight, slowing down photosynthesis, and affecting visibility. Low visibility can wreak havoc on transportation services and also discourage tourism.

And perhaps most importantly, it is also a threat to our well-being. Those small black particles that you sometimes see floating around are carbon particulates, from the carbon-rich peat. Peatfires are notorious for producing small particulates, sometimes as small as 2.5 microns (PM2.5).

Small particulates are especially dangerous because they cannot be filtered out by your nasal hairs when you breathe. They go directly into your lungs, and cause respiratory problems like coughing, wheezing, shortness of breath, and aggravated asthma. If these particles are trapped in your lungs for long periods of time, you can develop more serious lung diseases, like emphysema or even lung cancer.

These haze particles often also aggravate conditions in children, the elderly, and those with existing lung diseases, which may lead to premature deaths.  The 2013 haze was identified as the cause of the death of an asthmatic woman and an elderly man in Muar, Malaysia.

So, haze is primarily caused by thick smoke, produced by peatfires, stemming from disturbances in the natural peatland conditions. The solution then is deceptively simple: hands off the peatlands! And indeed, most countries in the region that experience peatfires do have policies restricting peatland use.

However, in reality, there are many factors working against the preservation of peatlands. Arable land in the region is getting increasingly limited, so peatlands are prized alternatives. Peatlands are often rich with valuable timber, which when sold, can serve as a lucrative startup fund for developers.

Because of these factors, developers often target peatland for agricultural development. And in countries like Indonesia and Malaysia where corruption is rife and permission is often just a matter of greasing the right palm, approval is easily obtained, despite policies to the contrary.

In fact, a study by Silvius and Kaat found that more than 20% of oil palm plantations in Indonesia, and around 13% in Malaysia are situated on peat. It is no wonder then that we continue to suffer from haze year after year.

I Can see Clearly Now

It should be clear now that haze is not as ‘natural’ and ‘uncontrollable’ as it seems. We can control haze, by controlling the (mis)use of the region’s peatlands.

Indeed, there are alternative economic uses for peatlands that would not disturb its natural conditions, like pineapple and fish farming, or even incentivizing carbon sequestration. Unfortunately, at the moment, industries like palm oil and pulp and paper are seen to be more lucrative, and hence more able to procure developmental rights to peatlands.

However, all is not lost. As members of the public, we can choose to only support products from sustainable supply chains, beginning from soil type. We can also continue to pressure governments to be more transparent in land use allocations, and peatland policy implementation.

Clear skies in this region should not be a thing of the past, something which our parents and grandparents refer to with nostalgia. With a little effort, we may yet be able to enjoy uninterrupted years of pristine air again in our lifetime.