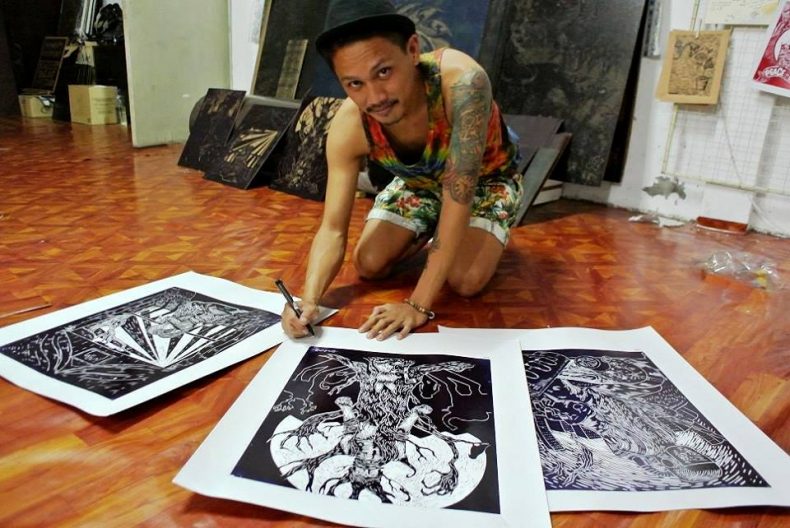 Punk rock and conservationism. They don’t seem to go all that well together. Or do they? Well, in Sabah, they do indeed. 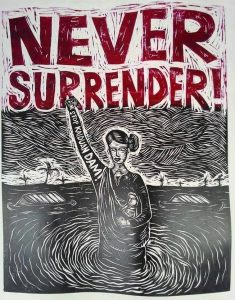 A woodcut calls on local tribespeople to resist a planned dam. to save their forests. Photo Credit: Pangrok Sulap via Facebook

That’s thanks to the art collective Pangrok Sulap (whose name translates as “punk rock abode”) in the town of Ranau on the slopes of Mount Kinabalu. The collective’s mission is to fight for the conservation of Borneo’s forests and indigenous cultures through art and a shared love of punk rock.

The members of the group create evocative woodcuts and other artworks to drive home their politically charged messages of green activism, which they then display around town and farther afield on printed posters.

They campaign for indigenous rights, for wildlife protection, against deforestation and against any form of exploitation of natural resources. In the process they cultivate a hip mien of environmentally friendly radical chic and run workshops to win other young Malaysians over to their cause of conservatism.

In one woodcut poignantly titled “The Last Sapling,” wild animals gather, almost reverentially, around a small sapling at a site where a lush forest once thrived. In another, an ethnic Dusun woman with a traditional conical hat and a cascade of beads down her front stares defiantly underneath the words “Beads not Dead” (a pun on the motto “Punk’s not dead). In a third, a sad slow loris, with a twig of wilting leaves in one hand, appears like a poetic image of forlorn desperation. 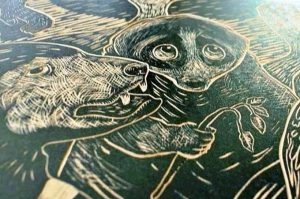 In yet another woodcut, miners with dollar signs in their eyes are confronted by placard-waving farmers while poisonous sludge oozes down nearby hills. The imagery is more than just a tableau of imaginative artistic hallucinations. Instead, it seeks to recapture the mood of an environmental calamity in Sabah that once forced members of a local indigenous tribe from their traditional lands after their paddy fields had been poisoned be run-off from a local copper mine.

Pangrok Sulap’s subversive artworks have earned its resident artists an increasing number of followers, according to several media reports. And thanks to their fame, the artists’ fearlessly outspoken message of conservation has been gaining more and more ground. People have “cut down most of the forest and turned it into palm oil plantations,” a founding member of the group who goes by the name Manjat told The South China Morning Post. “It’s still going on right now. The big companies try to trick the villagers into [letting them use] their land to plant palm trees; that’s why Malaysia is one of the biggest palm oil exporters in the world.”

But now, in the best tradition of the rebellious spirit that has long animated punk rock the world over, Pangrok Sulap is fighting back. Not for them the idealized and often photoshopped idylls of tourist brochures. They want to portray the state as they see it: a wonderfully biodiverse land that has fallen prey to human greed and destructive urges. “We are interested in showing the real situation in Borneo,” Manjat observes.

Nor do the artists pull their punches when it comes to naming those who they see as responsible for the sad state of affairs in Sabah. “I don’t think the government cares about the people,” notes Rizo Leong, another veteran member of the art collective who is an ethnic Dusun and describes himself as “just an orang kampong, a country boy.” “But the art makes them listen,” he adds.