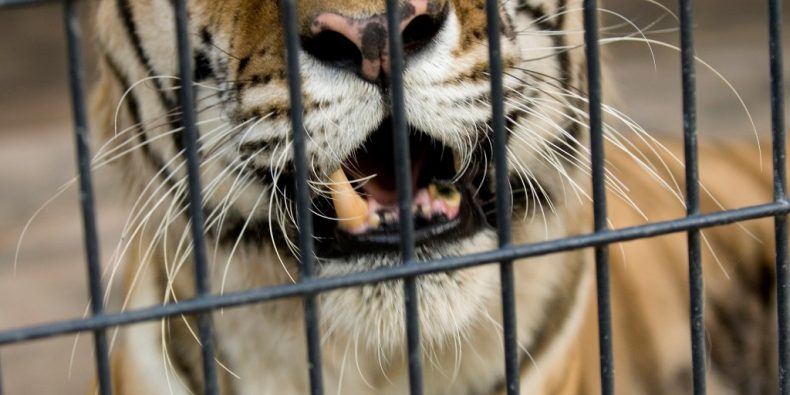 A captive tiger bumps up against the bars of its cage in a zoo. Photo Credit: Facebook

Dismal. That’s how an animal rights activist describes the state of affairs in Malaysian zoos. Not only do the country’s zoos keep animals in cramped and “decrepit” enclosures where they suffer from “appalling neglect,” but they do so in willing violation of the Wildlife Conservation Act 2010.

By doing so, the zoos break Malaysian Wildlife Conservation laws. Yet Department of Wildlife and National Parks (Perhilitan) officials turn a blind eye to it, he charges. “The fact that Perhilitan chose not to enforce the law must surely be a reflection of its senior management’s relaxed (horizontal) attitude towards (a) criminal activity (b) animal welfare. It’s never been any different, has it?” Whyte fumes. “[M]ost zoos in Malaysia do as they please regardless of animal cruelty and breaking the law. They know they have nothing to fear from Perhilitan, don’t they?” 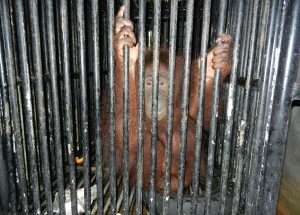 An orangutan sits in a tiny cage at the Melaka Zoo, south of Kuala Lumpur. Photo Credit: Daily Mail

There’s no denying that Malaysian zoos have a long way to go. They invariably feature substandard facilities and offer insufficient care for animals, which are routinely confined to dingy little cages where they languish largely unattended for the amusement of visitors.

Whyte has been on a years-long campaign to bring attention to their plight. “We still see appalling cruelty, grossly out-of-date zoos and enclosures, management and keepers who appear to not have a clue or a care about the needs of the birds and animals in their possession,” he wrote in a similar op-ed last year.

He has called on Malaysian animal lovers to boycott zoos in an effort to exert pressure on them. “If you care about wildlife and want to avoid being upset by seeing cruelty inflicted on animals, the best advice we can give you is to stay away from zoos and safari parks,” he noted. “They are only after your money.”

An outspoken activist, Whyte has often been accused of sensationalism. His critics have included fellow animal rights activists who dismissed some of his earlier statements as “untrue, unfounded and uneducated accusations.” A director at Perhilitan likewise labelled some of Whyte’s earlier charges as part of an unjust publicity campaign against his department.

Be that as it may, Whyte does have a point about Malaysian zoos, which should indeed clean up their act for the sake of resident animals. If managed properly, zoos can become safe havens of a sort for endangered captive animals and provide a public service by educating people, young and old, about a variety of animals and the importance of saving them and their habitats in the wild. If managed badly without proper concerns for animal welfare, however, zoos can become stifling prisons for their residents spending their lives in abject desperation.