Malaysia is a ‘global hub’ of Smuggling and Trafficking: UN 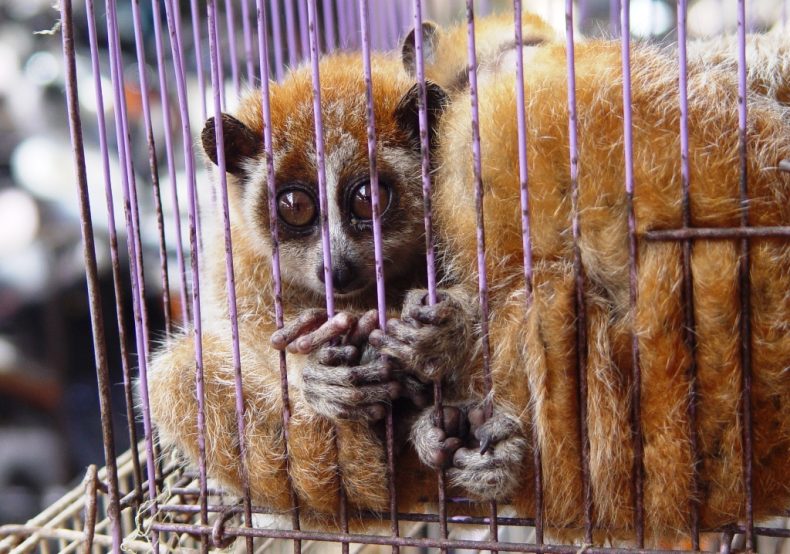 Two endangered pygmy lorises sit in a cage at a market, Exotic animals like them are smuggled far and wide across the region. Photo Credit: Elizabeth Bennett via WCS.org

This should come as no surprise to Malaysians, especially those who are familiar with the sorry state of affairs when it comes to extensive deforestation and wildlife poaching: The country is a leading exporter of illegally logged wood and is a hub of wildlife trafficking.

That’s according to the United Nations, which in his inaugural World Wildlife Crime Report has set out to assess the state of the environment worldwide in some depth. In 2013 alone Malaysia exported 3,455,000 cubic meters of timber, at least some of which was from protected plant species, including rare tropical agarwood.

Worse yet, the country has also been – again there is no surprise, though, in the finding – a global hub of the illegal wildlife trade with protected species being smuggled far and wide in and out of Malaysia. Everything from African ivory to reams of reptile skin passes through the country, and often originates in it, with Malaysia serving as a prominent transit point for global networks of smugglers and traffickers.

Slowly but relentlessly endangered species are being driven inexorably further to the brink of extinction in Malaysia and elsewhere around much of the planet. To stop such trends, the UN’s Office on Drugs and Crime has called for stricter laws and more rigorous enforcement of them. Every country should “prohibit, under national law, the possession of wildlife that was illegally harvested in, or illegally traded from, anywhere else in the world,” the UN recommends. “Domestic environmental laws should be expanded to provide protection to wildlife from other parts of the world.”

Malaysia already has such laws, but local officials either remain unable to roll back much of this trade or else turn a blind eye to it. “Malaysia has good laws. But good laws are only as good as the people who enforce them. If our officers are not trained, illegal wildlife trade will flourish,” Chris Shepherd, regional director of the anti-trafficking watchdog TRAFFIC, observed to the Star newspaper. “Small battles are being won. But overall, we are still losing the war. We are losing so many species,” he added.

We cannot afford to lose that war against smugglers and traffickers. If we do, the country’s environment – a world-renown hotspot of biodiversity with a myriad of unique species – will be much poorer for it. And so will we all be.