New Marine Zone will provide a Safe Haven for Sharks 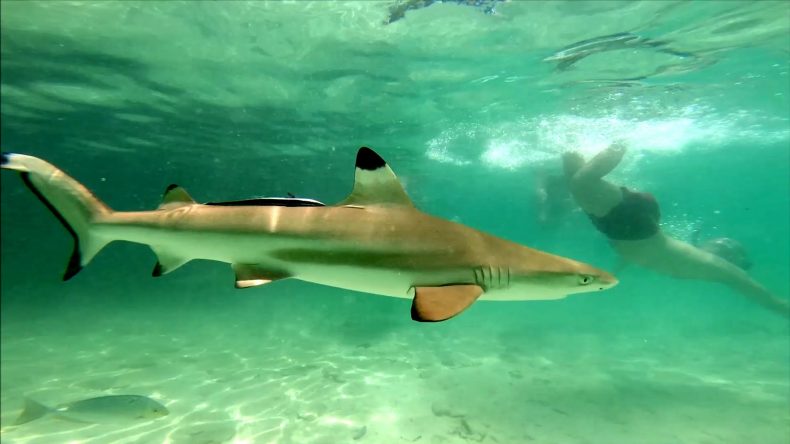 A shark swims placidly by among divers in a Malaysian marine park. Photo Credit: okshare via YouTube

An area off the northern coast of Sabah is just about to become a protected marine zone – the largest of its kind in the country.

The Marine Protected Area, which includes some of the nation’s most scenic coral reefs, will encompass three existing marine parks with a scattering of 50 islands within them. The area will become a sanctuary for resident sharks and other endangered marine animals with several separate zones with varying degrees of protection inside them. In some fishing will be banned entirely, while in others it will be allowed with conditions attached.

“Shark species are vital to the diving business, which generates about RM380 million (US$9.4 million) per year,” noted Seri Masidi, minister for Tourism, Culture & Environment. “We will lose the shark population in 10 years if stakeholders continue serving shark fin soup.” 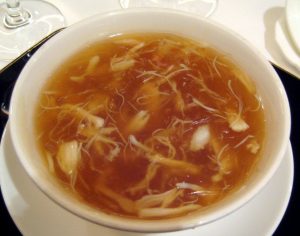 Shark fin soup may look like an innocuous dish but there is a cruel practice behind it. Photo Credit: Wikimedia Commons

Agreed. Unless comprehensive steps are taken to protect remaining shark populations, many species are bound to go extinct. Up to 100 million sharks, large and small, are killed for their fins each year worldwide in a gruesome trade that routinely sees newly mutilated sharks thrown back into the sea to die a slow and painful death.

The members of several once common shark species have plummeted precipitously as demand for their fins remains unabated in China and across much of Southeast Asia, including Malaysia, where shark fin soup is considered a traditional delicacy. In the region’s increasingly prosperous nations more and more patrons demand a taste of the status dish that was once the preserve of only the wealthiest. In other words, the democratization of dining habits is driving the world’s sharks extinct.

Conservationists and concerned citizens alike have been conducting several awareness-raising campaigns across Malaysia to wean locals off shark fin soup. “Shark fin is the most valuable shark product. High demand for shark fin is the main driver to unsustainable shark fishing globally,” said Dr Dionysius Sharma,  WWF-Malaysia’s executive director. “It is estimated that at least 1.4 million tonnes or 100 million sharks are killed per year.” And the mass death of sharks is bound to be bad for business: the tourism business, that is.”Global shark tourism generates revenue of around US$314 million annually and is expected to keep growing to $780 million annually over the next 20 years,” he added.

Malaysia is among the world’s Top 10 producers of shark products and is the third largest importer in volume terms, according to the United Nations’ Food and Agriculture Organization. As much as 84% of imported shark fins are consumed locally. “Between 2004 and 2011, an average of 1,384 metric tonnes of imported shark fins were consumed annually in Malaysia,” WWF-Malaysia notes. “In the past ten years, the volume of shark fin consumption has increased by an average of 54% per year.”