Could Horn Farming save wild Rhinos?

South African rhinos grave mortal dangers because of the horns they sport on their noses. Photo Credit: Pixabay

Rhinoceroses are generally docile herbivores which want nothing more than left to their own devices in the wild, or whatever is left of it. Unfortunately for the animals, whose very Greek name means “nose-horn,” rhinoceroses sport a conical growth of keratin on the tops of their noses, which they employ for protection and sexual displays.

We say “unfortunately” because that protuberance is highly sought the world over both by trophy hunters and by peddlers of traditional Chinese medicine for its alleged curative properties. Demand for that keratinous growth has lead to the decimation of rhinoceros species worldwide. Through almost herculean conservation efforts, several African rhino species have been brought back from the brink of extinction, but Malaysia’s own Sumatran rhinos have done rather less well. 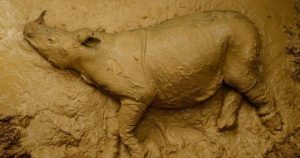 A newly captured female Sumatran rhino wallows in mud. She died soon after she was taken to a protected forest. Photo Credit: Jakarta Post

Last year Sumatran rhinos were officially declared extinct in Malaysian Borneo. Earlier this year a female Sumatran rhino, promptly named Najaq, was captured – the first to have been found alive in Borneo in four decades – only for the animal to die shortly afterwards, dashing conservationists’ hope for a new captive breeding program aimed at revitalizing the beleaguered species, which numbers a mere 100 animals or so left in the wild.

Sad, that? Very. Yet poachers and wildlife smugglers do not give a hoot about the status of endangered wildlife. All they care about is making a quick buck from the slaughter of animals whose parts can fetch hefty profits on the international black market. Criminal syndicates operate sophisticated international smuggling networks which have proved depressingly resistant to law enforcement efforts to curtail them – not least because corrupt officials on the take often lend a willing hand and turn a blind eye.

Demand for sought-after “natural” panaceas like rhino horns, in countries like Vietnam and China (where a single horn can sell for hundreds of thousands of dollars), has also remained largely immune to educational campaigns about the ravages of wildlife poaching and about the demonstrable absence of any health benefits that could result from consuming rhino horns (which are made of the same substance as human fingernails so rhino horn enthusiasts might as well be chewing their nails).

South Africans are now trying a different tact to try and save rhinos: selling the horns themselves. They plan to do this by sawing off the horns of live animals kept at ranches. This, apparently, can be done in a way that is only slightly stressful to mature animals and causes them no pain. Rhino ranchers in South Africa raise the animals like cattle and once in a while they could tranquilize their animals and saw off their horns without much fuss. 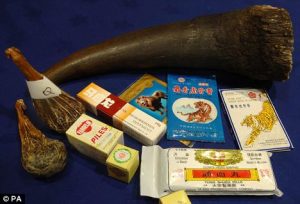 The reasoning behind the planned scheme, which was recently green-lighted by a judge, is that since no international ban on the sale of rhino horns has made a dent in black market demands for it, it might be more prudent to undercut criminal syndicates by providing rhino horns from captive animals legally in an effort to save wild animals from being poached for their horns.

“The reality is the trade ban has not worked by any reasonable measure and on the contrary has helped create a vast illegal market dominated by transnational crime syndicates that remain untouchable. Like the illegal drugs trade, will demand go away?” Pelham Jones, a rancher who is chairman of the Private Rhino Owners Association, wrote in an article for the group RhinoAlive. “Despite the number of poachers shot and killed or arrested, and despite our best efforts at huge financial and personal costs to rhino owners, the syndicates remain relentless.”

Yes, but what of ethical considerations and what of animal rights? These, argue the proponents of the legalizing scheme, should take a hind seat to conservation efforts to save wild rhinos, which are being increasingly poached despite all the measures in place to protect them. The numbers alone tell their tale: in 2009, when a seven-year moratorium was enacted on the domestic trade of rhino horns in South Africa, 122 rhinos were poached. By 2014 that number had risen to a shocking 1,215. Last year too 1,175 rhinos were killed for their horns in the country. Since 2008 around 6,000 rhinos have been killed in total.

Desperate times call for desperate measures, in other words, and the sale of legally farmed horns from captive live animals might just work. Legitimate concerns do remain, however. What is to stop illegally poached horns from being passed off as legitimate goods in a country notorious for epic levels of corruption?

When it comes to Sumatran rhinos, a similar initiative would be out of the question. Only a handful of them survive even in captivity. Yet legally supplied horns from South African rhinos could perhaps reduce demand on the horns of their Sumatran cousins, thereby helping them cling on with greater chances of long-term survival in the wild.