Save the Sun Bears from the Miri Crocodile Farm 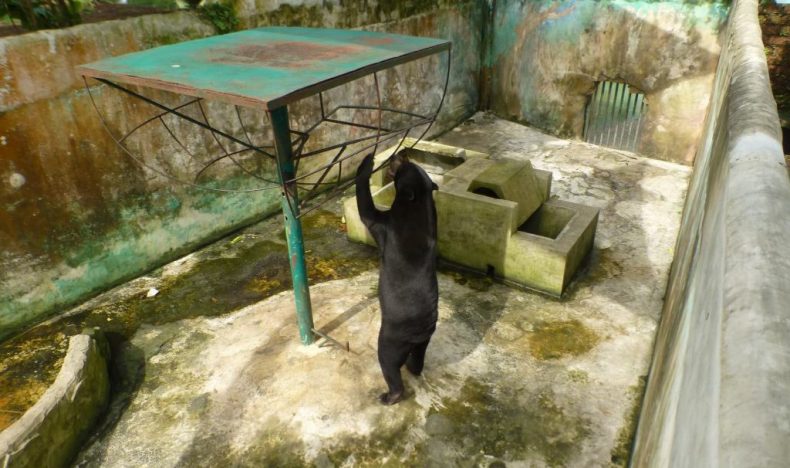 A forlorn sun bear inside his shabby confines at the Miri Crocodile Farm in Sarawak. Photo Credit: FOTO

Our friends at FOTO (Friends of the Orangutans) have been fighting hard to uncover the truth about Malaysia’s environment.  Good or bad, they are digging in and sharing what they find so that we can all more effectively fight for a greener future in Malaysia. This special dispatch, and the photos with it, comes from their research teams:

Researchers from Friends of the Orangutans Malaysia (FOTO) recently investigated the Miri Crocodile Farm (MCF) in Sarawak after we had received numerous complaints of cruelty and exploitation of wildlife from concerned members of the public. We were shocked to find the conditions the animals are forced to live in at the farm (it’s not even a zoo).

At MCF we found three sun bears forced to live in appalling conditions. These sun bears are visibly stressed and are suffering from zoochosis (obsessive, repetitive behavior that captive animals develop) as a result of living in a concrete tomb without enrichment. No readily available clean drinking water was seen. These are conditions that  resemble a squalid 19th-century zoo. Sun bears are a protected species in Sarawak and with many bear experts calling for urgent action to prevent their extinction in the wild. These bears and other animals at the farm urgently need help.

The management of MCF also offers farm visitors with opportunities to take photos with a sun bear cub. According to a member of the staff, this cub is taken away from its mother from inside an enclosure and returned to it at the end of the day, although no evidence of this practice could be determined by our investigators. It seems far more likely that the young bear permanently resides in a barren metal cage next to the photo session area. Needless to say, if this is true, it is extremely cruel to take this cub away from its mother so farm visitors can have their photographs taken with it. 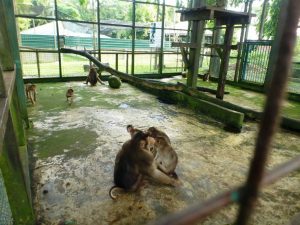 Short-tailed macaques inside their cage at the farm. Photo Credit: FOTO

It seems obvious that it is also extremely dangerous for both the bear and the public as the cub could at anytime, without warning, maul a farm visitor with its very large claws. If and when this happens, it would be the fault of the irresponsible and abusive management at MCF, as well as that of wildlife authorities in Sarawak who have allowed this practice to continue for almost 20 years despite repeated complaints from the public and media. Sun bears are extremely strong animals and by no means tame.

Sun bears are listed as a totally protected species in Appendix I of CITES, while the Sarawak Wild Life Protection Ordinance 1998 states that Appendix I animals “shall (not) be reared, kept, grown or cultivated in any commercial wild life farm.” So why has MCF got away with keeping and abusing the sun bears all these years?

Our investigators also saw erratic and stressed macaques kept in near barren cages, forced to sit on cold concrete day in, day out. Horses look thin and pale; reptiles such as snakes are housed in tiny aquarium tanks. The list is endless. MCF is a nightmare for all captive animals there. It seems the management of the farm either doesn’t know how to provide even basic care for its animals, or cannot be bothered to do so. They could also be severely underfunded. Possibly all three.

FOTO asks the Sarawak Forestry Corporation, Sarawak Forestry Department or some other authority for wildlife in Sarawak to urgently re-home the four sun bears and all IUCN Endangered animals at MCF. The farm also needs to urgently improve the living conditions of all other remaining animals. In neighboring Sabah, there is now a world-recognized sun bear education centre and sanctuary of international excellence. Following our public campaign against cheap and nasty tourist traps abusing sun bears for profit, the Sabah Wildlife Department earlier this year rescued the now internationally infamous Tawau Hot Springs bears and rehoused them at the sun bear sanctuary.

All animals need our care and respect and they must not be used and abused for monetary gains or other purposes. We call on all Malaysians to speak out and take action for voiceless animals. Citizens of our country should also remember that wild animals belong in the wild and not in captivity for the entertainment of zoo and farm visitors.