A sedated live tiger is taken away by Thai officials from the country's notorious "Tiger Temple." Photo Credit: Bangkok Post

For an example of how far wildlife traffickers are willing to go, look no further than neighboring Thailand. In a case that has roiled even hardened wildlife officials, police officers discovered the carcasses of 40 newborn tigers in a kitchen freezer at a famous Buddhist temple in central Thailand.

Conservationists campaigned long and hard for years to rescue captive tigers from Wat Pha Luang Ta Bua, popularly known as the “Tiger Temple,” in Kanchaburi province, near Bangkok, where the iconic predators were used as tourist draws by resident monks who allowed visitors to pose for pictures with the animals … for a hefty fee, of course. Yet even the most pessimistic animal rights activists could not possibly imagine the extent of shenanigans at the rural temple, which had been marketing itself as a benign sanctuary for tigers and other endangered animals. 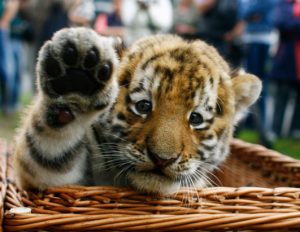 A tiger cub wants to be friends. Animal lovers prefer cubs alive. Some people, however, want them dead for their parts. Photo Credit: Animal Savior

When, after years of complaints from conservationists against the temple over its maltreatment of animals, Thai officials finally decided to raid the premises and take away the 134 tigers kept there, they discovered the remains of the dead cubs. Investigators suspect the newborn tigers were planned for use in magical potions that can fetch exorbitant prices on the black market.

Among the other gruesome finds discovered at the temple, Thai police officials also confiscated two tiger skins, hundreds of talismans made from tiger parts, numerous tiger claws and teeth, as well as jars filled with the organs of protected animals for use in amulets, magical potions and traditional medicine. Temple officials have publicly denied that the resident monks were planning to profit from the sale of these and other illegal items made from endangered species, but few people are buying it.

The shocking case highlights the dangers that emblematic animals like tigers face at every turn. Even some institutions that profess to work to protect them may in fact be profiting from the animals by using them as props for tourists and selling their parts on the illegal wildlife market after the animals die, be it of natural causes or not.

Is the situation different in Malaysia? Hardly. Several popular tourist destinations, including a hot spring in Sabah and a crocodile farm in Sarawak, have recently been revealed to mistreat endangered animals like sun bears in their care while forcing them to languish in neglect and squalor. Any cases of animal abuse are a disgrace and a shame.

As for tigers, whether they are in Thailand or Malaysia and whether they live in captivity or in the wild, they have to fear but a single species: us. It tells us a lot about the dire state of the world when it comes to wildlife conservation that even some Buddhist monks, who are supposed to live by a credo of “do no harm,” clearly cannot be trusted to have the best interests of animals they claim to protect at heart. For shame.