Sharks have their own Personalities 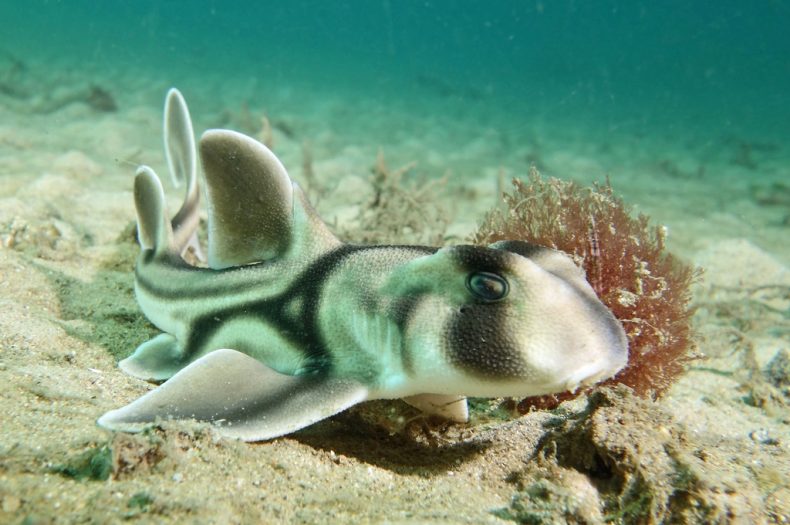 Sharks are nothing but mindless killing machines. At least that’s what popular movies like “Jaws” would have us believe. But sharks are no mere automata driven only by unquenchable blood lust. They have individual personalities, just like many other animals.

According to a paper published in the Journal of Fish Biology, Port Jackson sharks (Heterodontus portusjacksoni), a nocturnal species found in the waters of Australia, react differently to stressful situations and also score on a fairly wide scale when it comes to boldness. Some sharks, in other words, are consistently bolder and less averse to stress than other sharks.

The researchers found that out by subjecting the animals to two tests. In one test, designed to measure bravery, they placed a single shark within a small enclosure and timed how long the shark took to poke a head curiously out of the box and then swim out into the open. In the second test, sharks were lifted out of the water for a minute before being allowed back in: researchers then counted the times each shark beat its tail in quick succession, thereby measuring their level of anxiety.

The result: Whereas some sharks emerged almost instantly from their box, others took as much as 20 minutes. They scored on a similarly wide scale in responding to stress. This led the researchers to conclude that boldness varies from shark to shark, reflecting their individual personalities. “These results demonstrate the presence of individual personality differences in sharks for the first time,” they write.

Good to know, but so what? you might say with a shrug of the shoulders. You’d be wrong. The new findings aren’t purely of academic interest: they can be deployed for conservation purposes. “Understanding how personality influences variation in elasmobranch (cartilaginous fish) behaviour such as prey choice, habitat use and activity levels is critical to better managing these top predators which play important ecological roles in marine ecosystems,” the authors write.

These results and other lines of similar research might also help us see sharks in a different light. They aren’t just mindless brutes as many people believe but rather unique individuals with their own personalities. That insight should give us even more impetus for saving them from being driven to extinction for their fins.