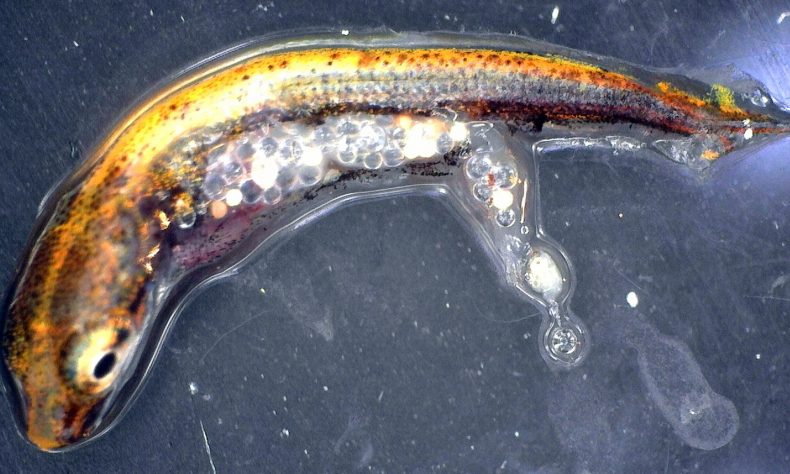 Microplastics have accumulated in the gut of a young fish. Photo Credit: Oona Lonnstedt

Here is why: because some fish embryos have developed a taste for polystyrene microplastic particles (which are of less than 5mm in size) that they mistake for planktons, their natural sources of food. In fact, many young fish seem to prefer microplastics to planktons when both are available, say Swedish researchers who published their findings in the journal Science.

The scientists studied the juveniles of perches and pikes in the Baltic sea and found that young fish have often become predisposed to ingesting the tiny particles of plastic litter that have accumulated in the seas and oceans over the years. “They all had access to zooplankton and yet they decided to just eat plastic in that treatment,” lead author Dr. Oona Lonnstedt told the BBC. ” It seems to be a chemical or physical cue that the plastic has that triggers a feeding response in fish,” the researcher explained. “They (the fish) are basically fooled into thinking it’s a high-energy resource that they need to eat a lot of. I think of it as unhealthy fast food for teenagers, and they are just stuffing themselves.” 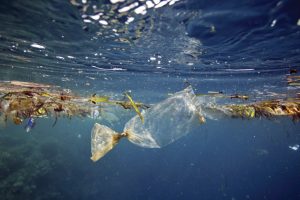 Plastic waste floats just under the surface in a sea in Southeast Asia. Photo Credit: Pixabay

Needless to say, that’s bad news as feeding on microplastics isn’t good for the fish. Many of them perish before they reach reproductive age. But that may not be before they are eaten by predators which are then caught and so some of the plastic may end up on your dinner table. That is especially so because the researchers found that many young fish that feed on microplastics have not only their immune system but also their built-in predator defense instincts severely compromised. “When placed in tanks with they natural predator, perch that ate plastic were preyed upon four times faster than those that did not. All were dead within 24 hours,” they note in a short video available on YouTube.

And the problem is going to get worse before it gets any better. Collectively people around the world dump an estimated 8 million tons of plastic waste into the oceans. “Without waste management infrastructure improvements, the cumulative quantity of plastic waste available to enter the ocean from land is predicted to increase by an order of magnitude by 2025,” the authors of a paper published in the journal Science have noted.

A lot of that plastic waste soon breaks down into small particles as a result of being exposed to the elements, which makes it easier for them to be ingested by a variety of marine animals, usually by accident. Microbeads in body care products are another large source of microplastics, which can then build up in the digestive system in the animals that swallow them, slowly leaching toxins into their system. Young animals, including fish, are especially at risk of stunted growth and premature death from plastic poisoning. In short, our plastic waste isn’t just unsightly; it also kills.