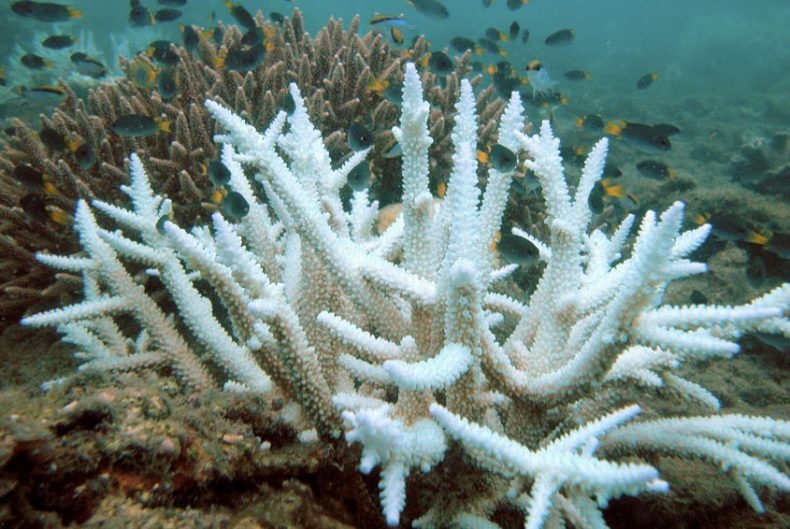 Coral reefs are among the world’s most diverse ecosystems with hundreds upon hundreds of marine creatures depending on them for their survival. The famed Coral Triangle of the Western Pacific, of which Malaysia’s own stunningly beautiful and world-renowned reefs are part, alone is home to at least 600 species of coral, 2,000 species of fish and numerous other marine animals.

Yet these unique but fragile ecosystems are at increasing risk from relentlessly rising surface water temperatures as a result of global warming. In response, corals routinely respond by shedding the algae that live symbiotically on them, nourishing corals through photosynthesis and giving them their vivid colors. In the process, corals turn bone white in what is known as coral bleaching. Bleached corals often aren’t dead yet, but they are especially vulnerable to environmental stresses, and mass bleaching in tropical waters from Malaysia to Australia has been reaching alarming levels in recent months. 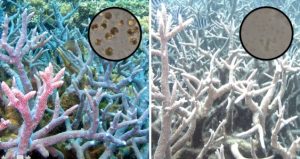 Healthy coral (left) with the microscopic algae that is necessary for survival (seen in circular close-up ). And bleached coral (right). Photo Credit: UNSW

But here comes a bit of good news: Researchers from the University of New South Wales in Australia have found that some algae could prevent corals from shedding them even as ocean temperatures rise. The corals cast off their algae because the latter respond to rising temperatures by releasing toxins, which damage both the algae and the corals.

But this is where it gets interesting. The researchers have found some algae that thrive in warmer waters on the Great Barrier Reef turn on a gene that neutralize those same toxins that they release, thereby helping prevent their coral hosts from bleaching. “For the first time, we have uncovered the mechanism that explains why some algae can withstand higher temperatures and avoid bleaching,” says Rachel Levin, one of the researchers, who published their findings in the journal Molecular Biology and Evolution. “We found they can switch on genes to produce proteins that neutralise the toxic chemicals.”

It gets better. By subjecting the algae to heat-stress experiments in the lab, the researchers manage to isolate the genes that trigger the response. They also discovered that stressed algae may switch from their normal asexual mode of reproduction to sexual reproduction, which may allow some algae to adapt faster to rising sea surface temperatures. This, they say, could be a natural “golden ticket” that allows some corals to survive bleaching.