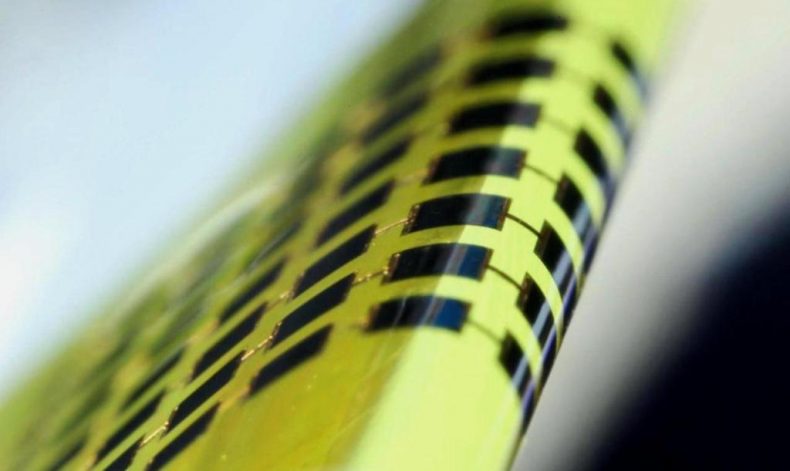 The new ultra-thin solar cells are flexible enough to bend around small objects, such as the 1mm-thick edge of a glass slide. Photo Credit: Juho Kim, et al/ APL

The sun is an inexhaustible source of clean energy, which is fast gaining momentum in Malaysia. The country has become one of the leading global producers of photovoltaic technologies, and its tropical climate with plenty of sunshine all year round makes Malaysia an ideal location for solar energy production.

But here’s a thought: What if you no longer had to rely solely on bulky solar panels but could carry some solar cells with you to power your wearable electronics? Turns out that’s not as futuristic as it may sound. South Korean scientists at the Gwangju Institute of Science and Technology have created ultra-thin and bendable photovoltaic cells that can do just that. How thin? They are only 1 micrometer thick, or a hundred times thinner than a human hair.

The ultra-thin solar cells have been created from the semiconductor gallium arsenide with the cells fixed onto a flexible substrate without any adhesives. “The cells were then ‘cold welded’ to the electrode on the substrate by applying pressure at 170 degrees Celsius and melting a top layer of material called photoresist that acted as a temporary adhesive,” the researchers explain. “The photoresist was later peeled away, leaving the direct metal to metal bond.”

After testing how efficient their device was at converting sunlight to electricity, they found it rivaled significantly thicker photovoltaics. Better yet: the cells proved remarkably resilient – a must if they are to be used on a daily basis. “The thinner cells are less fragile under bending, but perform similarly or even slightly better,” said Jongho Lee, an engineer at the Gwangju Institute of Science and Technology. The thin cells could be integrated onto fabrics or the frames of glasses and power the next generations of wearable electronics, he added.

Solar technology has been coming along in leaps and bounds. It’s becoming not only increasingly effective at harnessing the power of the sun but also increasingly cheaper. With new advances like this, the future of solar power is very bright indeed on the way towards a world where sunlight becomes our primary source of clean energy.