Penang’s Rivers are as Polluted as Ever

Garbage floating on rivers are not only unsightly; they also pose serious environmental and health hazards. Photo Credit: Pixabay

Sungai Pinang is a short river that winds through some fine scenery on Penang. It also happens to be among the most polluted rivers in Malaysia. And it’s hardly alone in that dubious distinction on the island, which has long been facing severe problems with water pollution.

How bad is the problem? Pretty bad. A quick survey of the island’s rivers by the news agency Bernama has found that several of them – including Sungai Pinang, Sungai Jawi, Sungai Juru, Sungai Perai and Sungai Mas – are little more than smelly and unsightly stretches of putrid water. While in decades past locals could bathe or go for a swim in these rivers, nowadays many of them don’t want to go anywhere near them.

Who is to blame? Apparently, some of the locals themselves. They keep dumping their garbage – everything from food waste to soiled diapers – into the rivers with wanton abandon, causing them to be clogged up even further with often toxic floating debris. Some of the worst offenders are curbside food vendors and nearby residents. “I always noticed individuals, whose attitude is apathetic, when I pass the small bridge (behind Ropewalk market) and they will simply throw rubbish into the river,” one local told Bernama. 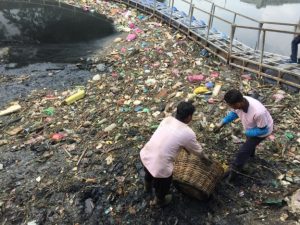 Two municipal workers are trying to clean up waste that clogs up Sungai Pinang on Penang. Photo Credit: Sinar Online

The key word here is “apathetic.” Or call it willfully negligent. Seemingly, many locals could not care less about the state of natural water sources on their famously scenic yet increasingly polluted island. Despite their best efforts to clean the rivers up, local authorities won’t be making much headway if many locals continue to treat the island’s rivers as garbage dumps and open sewers. According to an investigation conducted by the Consumer Association of Penang (CAP) not long ago, for instance, a slaughter house situated near Sungai Pinang has been releasing effluents into the river.

For years local experts have been warning of a potential public health crisis around heavily polluted rivers like Sungai Pinang. “The river is not only dirty but can spread diseases,” state secretary Oh Tong Keong warned recently while decrying the “garbage islands and animal carcasses” that befoul the once scenic river. CAP president Mohamed Idris agrees. “Due to the pollution, Sungai Pinang, Sungai Bayan Baru and Sungai Nipah in Balik Pulau have all turned black and dirty,” he said. “If the causes are not tackled effectively, they would create serious environmental impact and threaten public health. The unhygienic environment would result in the spread of infectious diseases.”

Then again, perhaps Penang should not be singled out for having badly polluted its rivers. Dozens of rivers across the nation have been classified as severely polluted. Should we just put this down to general apathy among Malaysians?