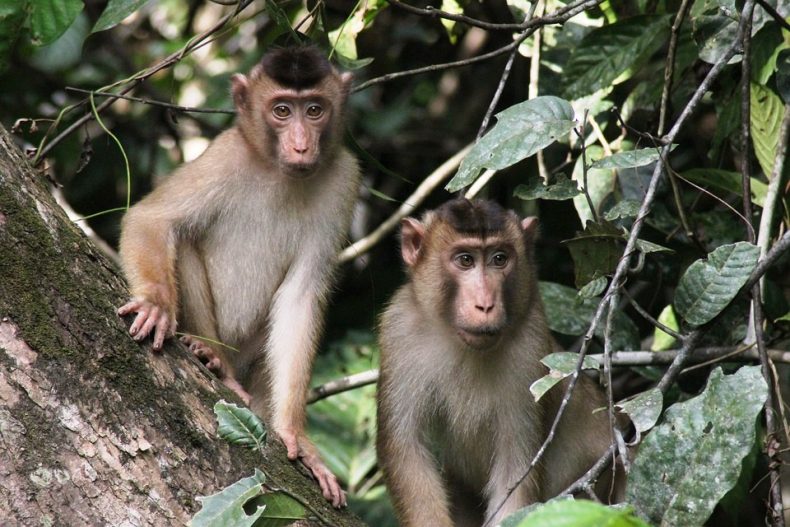 Two monkeys perch on a tree in Malaysia. Because of increasing habitat loss, monkeys are often forced to try their luck in human areas. Photo Credit: Pixabay

Monkeys, foxes, squirrels, wild boars, snakes. These animals make for quite a menagerie of wildlife. You may not want to see them in your backyard, though.

Yet all these animals are showing up near the houses of people living in the Klang Valley in the larger Kuala Lumpur area. And locals tend not to like it. “Disturbances can occur anywhere, especially in residential areas,” II Fakhrul Hatta Musa, deputy director-general of the Wildlife and National Parks Department (Perhilitan), told the Bernama news agency apropos a recent influx of wild animals into villages, towns and suburbs.

Monkeys can especially be a nuisance, according to locals. The wildlife department has been receiving thousands of complaints about animal invasions, most of them made by monkeys. This year alone over 500 cases of disturbances caused by monkeys have already been recorded in the Federal Territory and Selangor. Last year, meanwhile, locals lodged a total of 1,297 complaints against rampaging monkeys in the Klang Valley.

What’s going on? Are the animals acting out for some unfathomable reason? Hardly. Rather, what with the relentless loss of their natural habitats they are increasingly coming into contact with humans. Similar trends are playing out across much of Malaysia with wild animals being driven into ever smaller patches of relatively unspoiled natural habitats. Often, they end up with precious little space left and so can’t help but start invading settled areas for food and shelter.

How do people normally respond? Predictably, we’re sad to say. There have been numerous cases of vagrant wild animals being killed or harmed in a variety of ways from road accidents to outright slaying. The animals that met their ends this way have included tigers, elephants and other critically endangered species.

Meanwhile, in the Klang Valley monkeys that are considered too pesky by locals are often either relocated or put down. “All the monkeys which are exterminated are then put into the incinerator at the Paya Indah Wetlands in Dengkil,” II Fakhrul said. That does sound like a shame, does it not? We drive them out of their homes but when they invade ours in response we don’t like that one bit and so may end up killing them. Now, what conclusion should we draw about ourselves?