The Ozone Layer – drumroll, please – is finally on the Mend 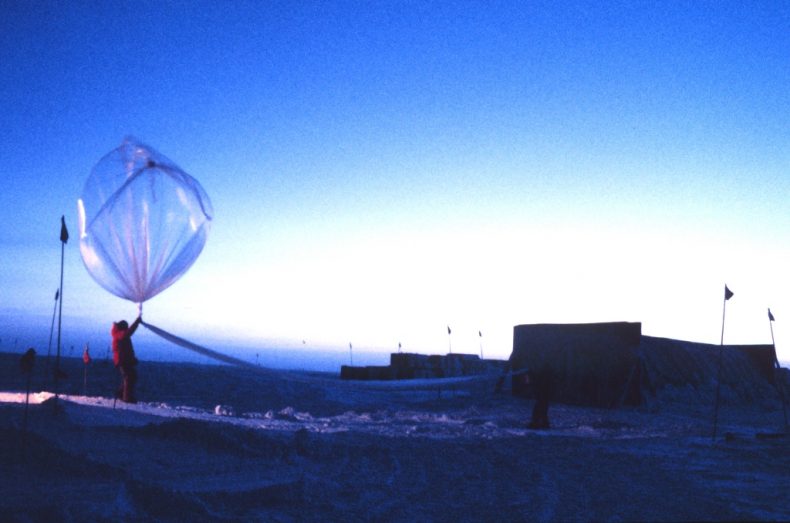 A researcher releases a weather balloon at the South Pole to measure the level of ozone in the stratosphere. Photo Credit: Wikimedia Commons

When it comes to the environment, good news is hard to come by. Hard but not impossible. Here’s a bit of great news: the ozone layer over Antarctica is on the mend.

Back in the 1980s scientists and environmentalists the world over were becoming increasingly concerned over a large hole in the ozone layer, which protects the biosphere below from the Sun’s ultraviolet radiation. The cause: ozone-depleting chemicals from aerosols, dry cleaners and refrigerators that we were releasing into the atmosphere with wanton abandon.

Thanks to global action, following the signing of the Montreal Protocol in 1987, however, these chemicals were phased out. Now a team of scientists at the Massachusetts Institute of Technology (MIT) in the US reports that since 2000 the ozone hole has shrunk by more 4 million square kilometers, or about half the size of the continental United States. The ozone hole, in other words, is closing up at last.

“We can now be confident that the things we’ve done have put the planet on a path to heal,” said Susan Solomon, a professor of Atmospheric Chemistry and Climate Science at MIT who was a lead author of a study published in the journal Science. “Which is pretty good for us, isn’t it? Aren’t we amazing humans, that we did something that created a situation that we decided collectively, as a world, ‘Let’s get rid of these molecules’? We got rid of them, and now we’re seeing the planet respond.”

Such enthusiasm may sound like a bit of boosterism, but so be it. We need far more of such concentrated collective actions to try and fix the myriad ills that ail the planet: climate change, overfishing, extensive deforestation, air and water pollution. Our success in helping fix the rapid depletion of ozone in the atmosphere should give us hope that we can achieve similar environmental successes in future. When there’s a will, there’s a way, as the saying goes.

Even as we may have solved one environmental problem, however, there are several more that demand urgent attention. Some climate scientists, for instance, believe that as matters stand we have no hope of keeping global warming at manageable levels. That’s not because we don’t have the tools but rather because we are not universally committed to enacting the necessary carbon emission cuts. That is to say, we can’t be sitting on our laurels. We must continue to work together to tackle environmental problems.