Why do Elephants cross the Road? 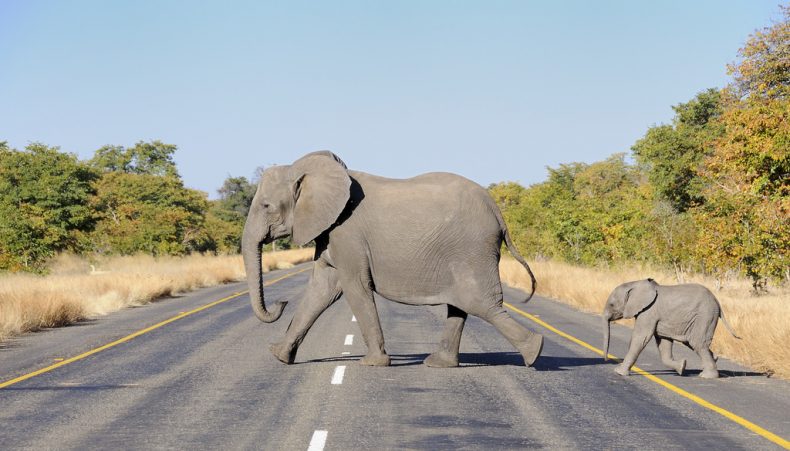 A mother elephant with a calf crosses a road. Such scenes are increasingly common at some roads in Malaysia. Photo Credit: Andrew Ashton via Flickr

Picture yourself driving along a highway when suddenly a herd of wild elephants appears by the side of the road. A hair-raising situation, that, yes.

Yet this is what happens regularly along the East-West Highway, which runs between the district capital of Gerik in Perak and the district of Jeli in Kelantan. The wild elephants are from the Royal Belum State Park and Temenggor Forest Reserve, according to wildlife officials. The animals often wander around the highway, especially in early morning and late at night when visibility is low. Officials have asked motorists not to panic if they encounter the pachyderms and to allow the animals to pass unhindered.

Being more vigilant behind the wheel is important, but that alone won’t solve problems. Over the past five years almost 2,000 protected animals have perished in road accidents across Malaysia, according to official figures. The actual number might even be higher with many animal deaths having gone unreported. Tigers, tapirs, foxes, leopards, monkeys, wild boars, monitor lizards and myriad other protected species have died, and continue to die, as roadkill around the country’s roads.

What are they doing on those roads? you may wonder. Many of these animals have been driven from their natural habitats by encroaching development. Deprived of amply roaming grounds, wild animals often have no choice but to venture into populated areas where they are at increasing risk of being hunted, killed or run over. Recently, a Malayan tapir was seen roaming around near the coast of Changi in Singapore. Since there are no wild tapirs in the island state, local officials suspect the animal must have swum across from Malaysia. Meanwhile, back in Malaysia at least 54 tapirs have died in road accidents over the past decade.

Increasing sightings of wildlife near roads and urban areas are testament to underlying problems in the country’s natural environments. Most wild species are by nature elusive and prefer to avoid coming in contact with people. That they increasingly do come into contact with us is a sign that they have no more place left to hide. With forests shrinking by the day owing to rampant logging and deforestation, wild animals, it seems, are being driven from their homes at alarming rates.

The solution is simple: keep those forests intact. We must stop clearing woods and peatlands.