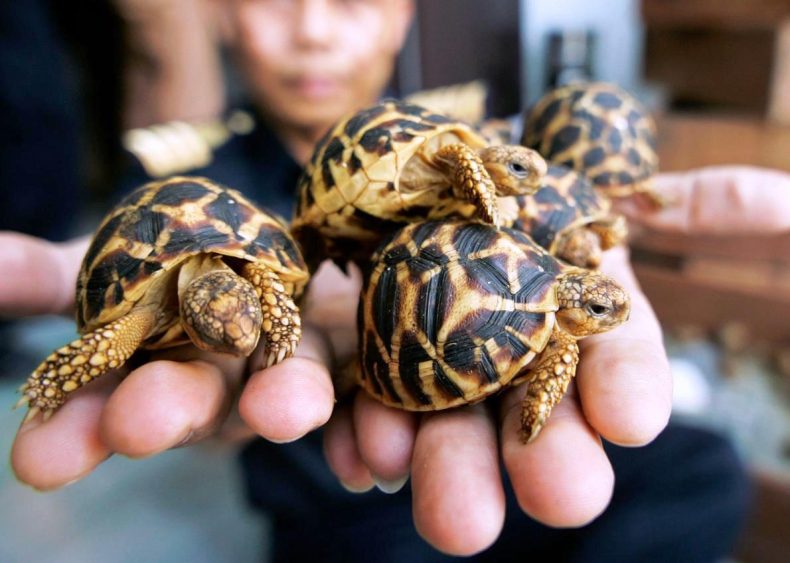 An official shows off baby star turtles from India. The reptiles are popular as pets and frequently trafficked around the region. Photo Credit: Wikimedia Commons

The plight of turtles in Malaysia continues. Exhibit A: Four Indian men were detained in two separate sting operations for possessing a total of 1,070 exotic and endangered turtles belonging to several species.

In one of the raids, two Indian nationals were nabbed by Wildlife Crime Unit officials at a house in Petaling Jaya. The two men were found to have 1,011 star tortoises and 23 Indian roofed turtles in their possession. The reptiles would have been worth around RM600,000 on the black market. 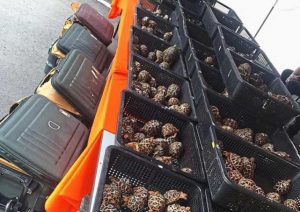 Over a thousand turtles have been sized from traffickers in two separate raids. Photo Credit: Wildlife Crime Unit

During a second, follow-up raid, this one conducted at a budget hotel in Kuala Lumpur, another two Indian men were found to be “in possession of 36 black pond turtles in four bags without valid documents,” wildlife officials said. The suspects will be facing charges of possessing protected wildlife without proper permits under Section 68 of Malaysia’s Wildlife Protection Act of 2010. If convicted, they face a prison term of up to three years or a maximum fine of RM100,000, or both.

The turtles had been smuggled into the country by a South Asian wildlife trafficking ring. They had been delivered in luggage bags by air and were on the verge of being sent on to other destinations in smaller shipments. The Indian men had reportedly been awaiting orders in a rented house about where to send the turtles when they were detained.

Indian star tortoises (Geochelone elegans) are popular as exotic pets thanks to their bumpy shells with radiating patterns of yellow and black that resemble stars. They are native to India, Sri Lanka and parts of Pakistan and are widely considered to be among the most attractive tortoises in the world. Indian roofed turtles (Pangshura tecta), so named for their oddly shaped carapace elevated in the middle, are also popular as exotic pets. The animals live in freshwater rivers in South Asia and are regularly trafficked. Relentless poaching and habitat loss have decimated their numbers.

Black pond turtles (Geoclemys hamiltonii) are likewise highly prized on the exotic pet market because of their eye-catching wedged shells and black skins embellished with polka-dot patterns. They are facing the threat of going extinct in the wild as a result of rampant poaching.

Meanwhile, even as some wildlife traffickers smuggle protected turtles into Malaysia, other ones try to smuggle other protected turtles, or their eggs, out of the country. Just a few days ago another four men, these ones from the Philippines, were arrested in Sabah for trying to smuggle 19,000 sea turtle eggs out of Malaysia.