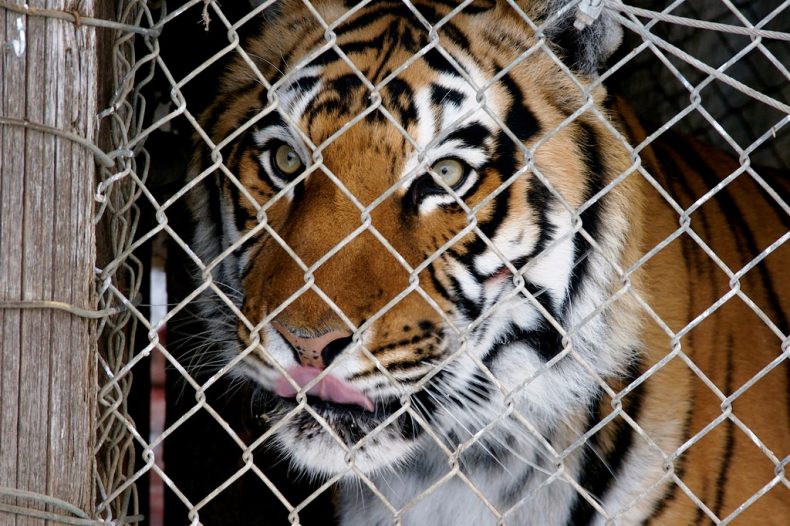 A captive tiger stares out of its cage. Photo Credit: Braden Kowitz via Flickr

Close tiger farms. That’s what the Wide Fund for Nature (WWF) has called on governments in Asia to do. The conservationist group issued its call on occasion of International Tiger Day on July 29.

Closing such farms, where the animals are bred in captivity and routinely exploited for commercial purposes, would assist in the fight against the illegal sale of tigers and their parts across the region, WWF explains. According to the nonprofit, around 200 tiger farms operate in Asia, most of them in China, Thailand, Vietnam and Laos. They are home to around 8,000 tigers.

That’s double the number of tigers that are life in the wild in Asia. Many tiger farms have been accused of selling tiger parts clandestinely, thereby fueling the demand for them on the illegal wildlife trade. The farms’ “existence undermines efforts of countries to protect cats living in the wild and creates demand for products made of tiger parts,” WWF says. 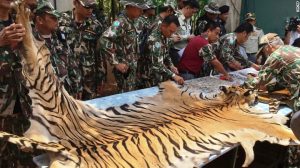 In June, officials in Thailand raided the so-called Tiger Temple, a Buddhist monastery which was popular with tourists who flocked to the site to take pictures with tigers. They discovered a house of horrors at the site with dozens of dead cubs preserved in formaldehyde, as well as scores of tiger teeth, several tiger pelts, and numerous other objects that were destined to be sold on the black market as magical talismans or potions. The temple’s 134 tigers were taken away to a government facility.

A good thing too. That said, simply closing down all tiger farms, or many of them, cannot be done without proper forethought and planning. Their tigers, which have been born in captivity, have become used to the presence of people and so they could not survive on their own in the wild. They would have to be relocated to other captive settings. Rather, the farms should be phased out step by step so as to ensure the well-being of tigers kept there.

The farms claim to be sanctuaries for tigers, yet they serve no conservation purpose whatsoever. Often animals from different subspecies are allowed to interbreed, which dilutes the characteristics of each subspecies. Such crossbred tigers could never be used to help replenish wild populations in places like Malaysia or Thailand, where native tigers are on their last legs in the wild. Essentially the farms operate either as petting zoos for visitors or as places where tigers are harvested for their parts with little concern for the well-being of the animals.

“Stopping all trade in tiger parts, and phasing out these tiger farms, is of the utmost urgency if the tiger is to survive in the wild,” Susan Lieberman, director of the Species Programme of WWF International, said. “It is time for the world community to join together, with tiger range state governments, to stop all poaching of tigers for illegal trade.”

She said those words back in 2009. Sadly, not much has changed since then.