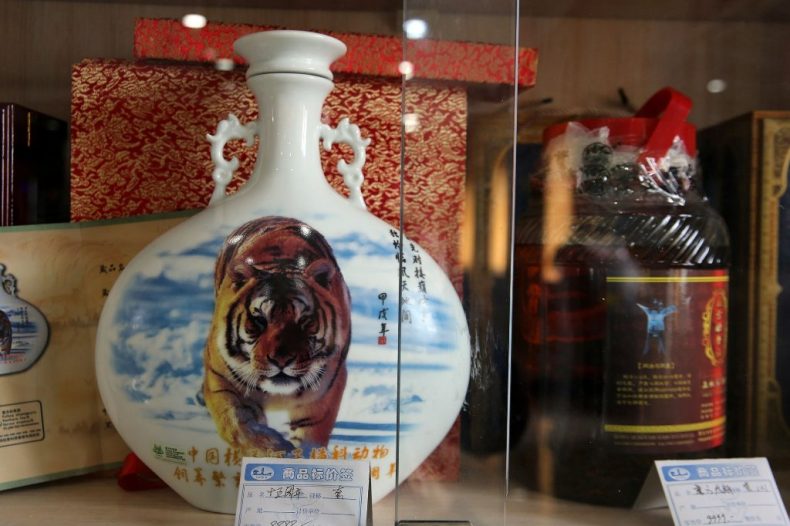 A flask of 'tiger bone wine' is on sale at a Chinese apothecary. Photo Credit: Facebook

Tigers and other critically endangered “exotic” animals are routinely poached for the silliest of reasons. That reason is that many people continue to believe that potions made from tiger bones or whiskers or other body parts possess magical curative properties. And they also continue to believe that talismans made from tiger teeth or claws or pelts provide magical protection against the arrows of misfortune. 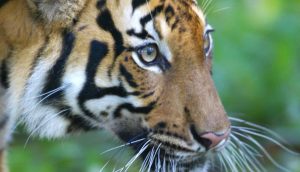 Majestic animals like this Malayan tiger belong alive in the wild, not dead in medicinal concoctions. Photo Credit: WWF

Both sets of beliefs are, of course, sheer nonsense. And yet people carry on believing them. And when there’s a market for rare animal parts, many unscrupulous and greedy people will be all too happy to supply those parts, even at the cost of driving entire species extinct in the wild. There’s little that we can do with ruthless poachers and wildlife traffickers except go after them with zeal and throw the book at them when they’re caught so as to try and deter others like them. Hence the need for stringent wildlife laws and their rigorous enforcement.

But what about the seemingly insatiable demand for exotic animal parts? Unless that demand is tackled at source, the fight against wildlife traffickers will always remain a rearguard action. That is why it’s good to know that Natural Resour­ces and Environment Minister Wan Junaidi Tuanku Jaafar is aware of the need to educate people about the folly of driving tigers extinct just because some people atavistically attribute magical properties to these animals as if they were fairytale creatures with awesome powers like unicorns.

It is a grave threat to the cause of conservation, he noted, “that there are superstitions on the advantages and benefits of eating tiger meat or other exotic meat.” That definitely doesn’t help, agreed. “There is a need to create public awareness, especially among the young, on the importance of preserving tigers,” the minister went on to explain. “We must tell them that there is no truth behind these myths.” Yes, we must.

Wan Junaidi did not explain how his ministry will go about educating the public about the singular lack of unique or even any medicinal properties found in exotic animal parts like tiger bones, rhino horns and sun bear bile. Here’s an idea: Why don’t we require all apothecaries that peddle such “traditional medicines” to prove the proclaimed curative virtues of their ware in proper scientific settings? If they fail to comply or else fail to demonstrate those medicinal properties satisfactorily, they should be obliged to face serious legal consequences for being proven charlatans. That might give them second thoughts about perpetuating old myths for financial gain. 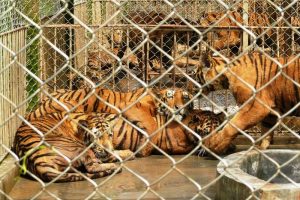 Tigers languish in dingy and crowded enclosers at a tiger farm in China. Photo Credit: One Green Planet

Here’s another idea: Let’s also keep telling people that killing endangered animals just because they want to consume their parts for selfish reasons – whether those reasons involve health-related causes or dietary ones – is deeply immoral. “Our activities and what we do has [an] effect on the environment and wildlife,” the minister noted. “We must not be excessive in our actions and consider other living beings in our surroundings.”

Indeed. A good start in that direction is to stop treating rare and exotic animals in Malaysia as nothing but sources of traditional medicine and “exotic” dishes. And the people who refuse to do so of their own accord must be compelled into doing so.

When a “tradition” means the relentless exploitation of animals for no proven medicinal benefit, that tradition deserves to die out. As matters stand, however, traditional Chinese medicine continues to pose grave threats to wild and captive tigers alike, as well as to myriad wild animal species, with its insatiable need for their parts. This must stop. And we can all do our part in making sure that it does.