Save the Sun Bears 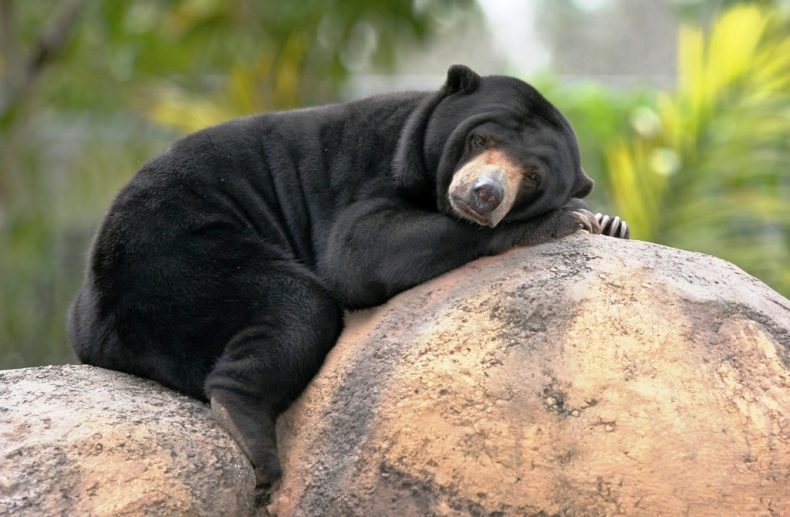 A Malayan sun bear takes it easy during one of its siestas. Photo Credit: Wikimedia Commons

If we needed any more proof (and we really don’t) of the callous disregard of wildlife traffickers for even the most basic standards of decency, here it comes: a man was just arrested in Vietnam for carrying 18 frozen sun bear legs … on a bus.

This means that yet more bears, these charming and delightfully mischievous creatures, have been butchered for their legs and paws, which are used as ingredients in traditional medicine and the traditional “delicacy” of bear paw soup.

And so Malaysia’s eponymous sun bears (Helarctos malayanus) continue to be victims of human greed and folly throughout their range from Malaysia to Laos to Vietnam. Classified as “vulnerable” in the wild, populations of these small bears have shrunk by an estimated 30% over the past three decades. They have lost much of their habitats to farming, oil palm cultivation and commercial logging; they have been poached relentlessly for their body parts; and they have routinely fallen victim to road accidents and other hazards of urban development. 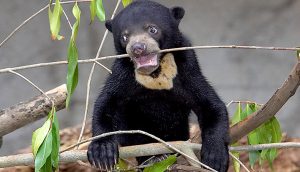 A sun bear cub chews on a twig for a bit of fun. Photo Credit: San Diego Zoo

And as if that wasn’t enough, many of these bears also end up having to endure untold pain and suffering in captivity. They are regularly kept at “bile farms” where the animals, often declawed and defanged, languish in tiny cages for years on end so that their bile can be regularly drained for use in traditional Chinese medicine. In Laos and Vietnam alone, hundreds of such farms are believed to be operating illegally. Many of these farms acquire the animals by poaching them live from the wild.

“Unbridled illegal trade in bear parts and products continues to undermine CITES, which should be the world’s most powerful tool to regulate cross-border wildlife trade,” Kaitlyn-Elizabeth Foley, senior program officer for TRAFFIC Southeast Asia, noted recently. TRAFFIC and other conservationist groups are working tirelessly, in tandem with wildlife officials in several countries, in order to roll back the illegal trade in sun bear parts.

What the bears also need, however, are protected habitats where they can be their usual delightful bearish selves without the dangers of being harmed by people. That isn’t the case yet in any of the countries in the region with sun bear ranges. In Thailand, their numbers have halved in just two decades in at least one area. They have not been faring well in Malaysia, either. Recently a mutilated sun bear corpse was found floating in the Kinabatangan River in Sabah without its paws, indicating the animal had been killed just for those missing paws.

Murdering a beautiful and special animal like that is a crime against nature. We must try and stop all such crimes and save the sun bears before time runs out for them.