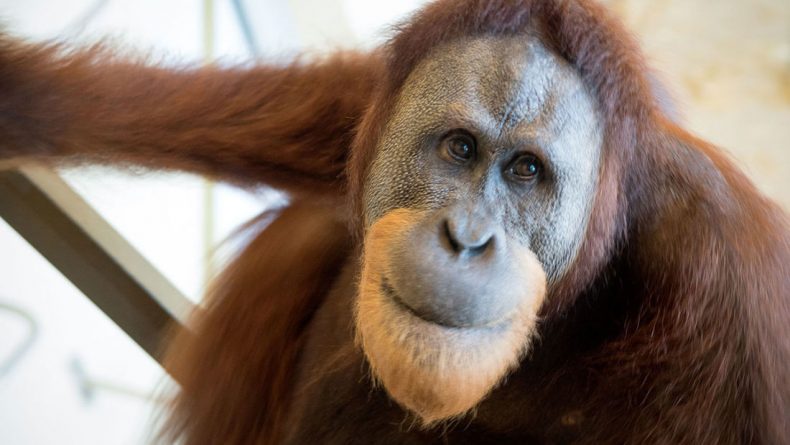 Rocky, a male orangutan in the Indianapolis Zoo, has learned to emulate his trainers by making human sounds. Photo Credit: IFL Science

Fair question, but here’s the thing: Rocky doesn’t just grunt in any random manner. Rather, he can modulate the tone of his voice in a way that differs from natural orangutan calls. He does so in an effort to imitate human sounds. And that’s a big deal because it means that Rocky can purposefully control his vocal cords, which shows that not only humans are capable of this feat, contrary to what we’ve long believed.

“[W]e provide the first evidence for real-time, dynamic and interactive vocal fold control in a great ape during an imitation ‘do-as-I-do’ game with a human demonstrator,” explain researchers from Durham University in a paper published in the journal Scientific Reports. “The subject instantaneously matched human-produced [sounds] as they were randomly modulated in pitch, adjusting his voice frequency up or down when the human demonstrator did so, readily generating distinct low vs. high frequency sub-variants.”

That is a rather torturous way of saying that Rocky can imitate the tone and pitch of vowel-like human sounds. In one test, a human researcher emitted a series of various human sounds, expecting Rocky to imitate each of them. That the primate duly did, demonstrating an impressive ability not only to control his voice but also to learn to make new sounds that are different from natural orangutan calls. He has shown that great apes, our closest evolutionary relatives, are capable of vocal learning. 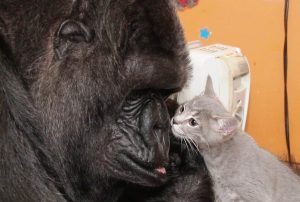 Koko the gorilla with one of her favorite kittens. Photo Credit: Koko Files

“This suggests,” the researchers explain, “that the human ability to control [our] voice and learn new sounds could be traced back to” our common primate ancestors with great apes. This finding can help revolutionize our understanding of the evolution of our vocal system. “A non-human great ape can achieve levels of volitional voice control qualitatively comparable to those manifested in humans,” the researchers surmise. In fact, Rocky can control his voice in the same way we do when having a chat by changing the rhythm and pitch of sounds as we see fit.

Then again, perhaps we should not be surprised. Kanzi, a male bonobo, has learned to communicate extensively with his human handlers using a keyboard with lexigrams (symbols that represent words). Koko, a female gorilla, has likewise learned to communicate through sign language with a vocabulary of hundreds of words.

The idea that great apes can learn to communicate with us in a variety of ways remains controversial, with some scientists arguing that they only learn to ape (so to speak) their handlers in making sounds, selecting lexigrams or using hand signs. There is no denying the fact, however, that we have much to learn about animal consciousness. There’s no denying, either, that orangutans, bonobos, chimpanzees and gorillas are far more intelligent, creative and empathetic creatures than many people tend to give them credit for.