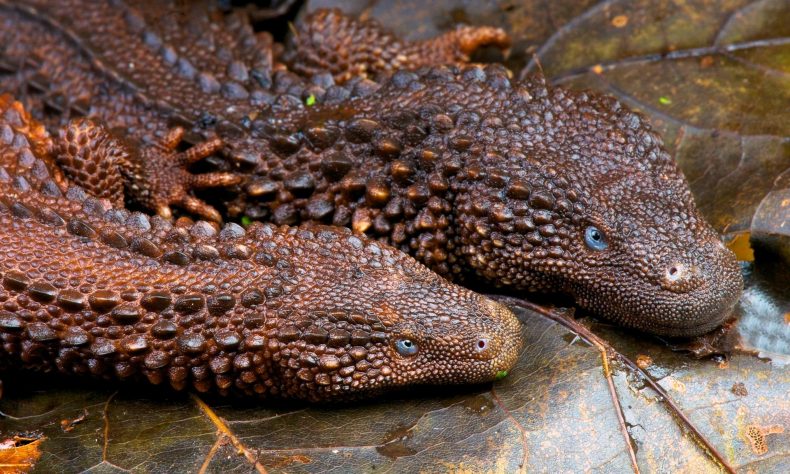 No animal large or small, strange or beautiful, it seems, escapes the attention of wildlife traffickers. One of the latest species being poached relentlessly for the exotic pet trade is what at first glance might seem like an unlikely candidate as a pet: the Bornean earless monitor lizard.

Yet that is what the earless monitors (Lanthanotus borneensis) are – much sought-after pets in Europe and Japan. Aficionados of the rare animal prize it for its dragon-like appearance, which makes the lizard resemble a miniature version of Japan’s fabled celluloid monster Godzilla. 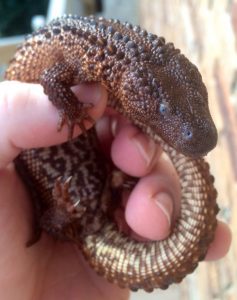 Growing to around 20 centimeters in length, the orange-brown animals have beady blue eyes, short limbs, long and tapering prehensile tails, lithe but compact bodies and no visible ears (although they can hear). They have several rows of bead-like keeled scales running along their lengths on their backs and pleasingly patterned undersides. They are little understood nocturnal creatures that prefer to spend much of their time in their burrows underground, where they feed largely on earthworms and insects.

In the past these enigmatic creatures, which are endemic to Sarawak and West Kalimantan, could remain elusive in their densely forested habitats. Extensive habitat loss from palm oil cultivation, however, has been driving them more out into the open. They were first described scientifically in 1887 but rediscovered by collectors only in 2012, when the animal began popping up for sale in online forums. Renewed global interest in them among hobbyists has been gathering momentum ever since.

Within less than a year and a half from May 2014, for instance, nearly 100 of the earless monitors from 35 different dealers in 11 countries were offered for sale on various online forums, according to investigators. Offline, too, they have been trafficked relentlessly. In October 2015, a German wildlife smuggler was caught with eight earless monitors stuffed down his trousers at Jakarta’s international airport. Last March, meanwhile, another German national was caught with 17 other lizards at an airport in Borneo.

The lizards have been poached with such zeal that they may be becoming endangered in Borneo. To stop that from happening, Malaysian authorities want to place the animal under international protection as per the Convention on International Trade in Endangered Species of Wild Fauna and Flora (CITES). They will propose doing just that at the United Nations Climate Change Conference in South Africa this coming September. Without that international protection, they insists, the lizards, once smuggled out of Malaysia, can be sold with relative freedom in Japan and Europe, which hampers efforts to protect it in the wild.

“[I]t now has become a current issue that people are collecting it from the wild,” said Rambli Ahmad, an ecologist for the Sarawak Forestry Corporation. “And that is the reason why we want to propose it under the listing as we see that this is happening,” he added.

The earless monitor is the only one of the 70 species of monitor lizards that are not protected by CITES. In Malaysia the animals have been a totally protected species since 1971, and under the Sarawak’s Wildlife Protection Ordinance anyone caught trading in them faces the prospect of two years imprisonment and fines of up to RM25,000. 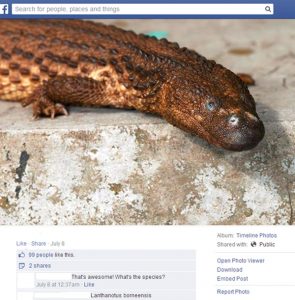 Nonetheless, according to the anti-trafficking watchdog TRAFFIC, the lizards continue to be sold for a pittance on the illegal wildlife market in Borneo. In Japan, however, a pair of the lizards previously sold for  3 million yens (MR120,000), although these days the animals can be had for a lot less than that. In Europe, meanwhile, hobbyists might be willing to shell out as much as €5,000 (MR22,500) for one of the rare lizards.

“Our research highlights the importance of the Internet and social media in the trafficking of species in high demand by specialist collectors: the reach online traders have is both instant and global,” Sarah Stoner, a senior wildlife crime analyst at TRAFFIC, noted back in 2014.

To make matters worse for the lizards, they do not breed well in captivity, which means they are routinely taken from the wild for sale around the world. Their rarity means that they can be sold at high profit margins in a boon to wildlife traffickers. “All the specimens available outside Borneo have been illegally obtained and brought there,” Mark Auliya, who is co-chair of the IUCN’s monitor lizard specialist group, told Britain’s Guardian recently.

“For the people who harvest and collect lizards,” he added, “it’s like additional pocket money. The main money is made by syndicates of importers and exporters – the profit margin is extremely high.”

And so their rarity and “exotic” looks are driving yet another beleaguered species further to the brink of extinction. The solution: we must make the sale of the lizards illegal globally. And we must step up efforts simultaneously in Borneo to protect wild populations of the earless monitor lizards. TRAFFIC also recommends that animals seized from the exotic pet trade be released into the wild, if possible. Maintaining healthy populations of the animals in the few locations where they live in Borneo, the group notes, “is paramount to lessen any impact illegal takings may have already had.”