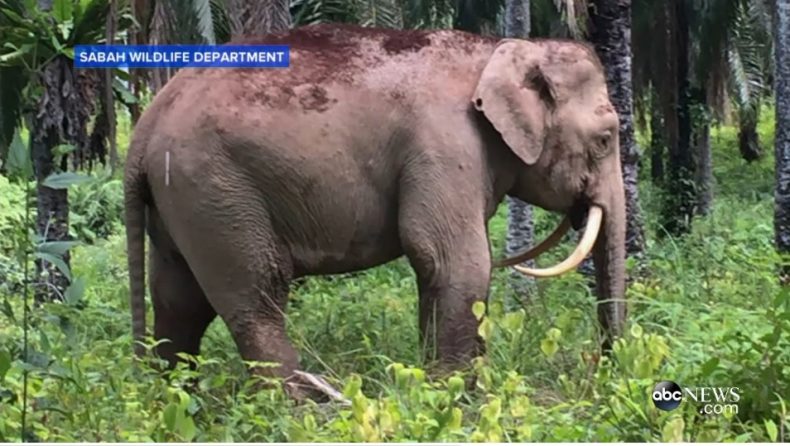 We’ve all heard of saber-toothed cats, those stately predators of the Paleolithic. But saber-toothed elephants? It turns out that they, too, do exist. Or at least some do. And in the forests of Sabah, no less.

Wildlife officials in the Malaysian state have come across a Bornean pygmy elephant with large tusks growing not up and forwards but curving down and backwards. They spotted the 20-year-old bull near a palm oil plantation in Tawau. “It’s very unusual,” said Sen Nathan, the assistant director of the Wildlife Department’s Wildlife Rescue Unit. A similar elephant was spotted a few years ago in Sabah and one last year.

The newly discovered elephant’s tusks “resemble the prehistoric sabre-tooth tiger, but of course, they are not related,” said Andrew Sebastian, co-founder of the Ecotourism and Conservation Society Malaysia. “It could make wildlife watching in Sabah more interesting.”

Why the male elephant has grown such crooked tusks remains a puzzle. They don’t seem to impede him in his usual tasks in the forest, though. “We’re not exactly sure why the tusks are like that,” Sen said, “but it could be a congenital defect or maybe because of inbreeding.” He added: “This is a rare find, but all elephants are unique on its own.”

Indeed they are. Yet we have hardly been treating Malaysia’s unique wild elephants with the attention and care that they deserve. Instead, we have been wantonly destroying their natural habitats. We have also harmed them directly, such as when they have wandered into orchards or plantations in search of food. Several elephants have been shot or poisoned in recent years in conflicts with people.

“Logging activities create a lot of activity and noise that can scare off wildlife, including elephants,” explains Meor Razak Meor Abdul Rahman, a field officer for Sahabat Alam Malaysia. “Often, human-elephant conflict happens because human activities are encroaching onto the elephants’ territory.” In other words, we drive elephants out of their forest homes, yet when they end up encroaching on our own turfs, we don’t like that one bit. Hypocritical? You bet.

Bornean Pygmy elephants are listed as endangered under the International Union for Conservation of Nature and Natural Resources. In fact, their numbers in the wild have dropped so low (some 2,000 to 2,500 individuals) that conservationists have warned that the pachyderms, which are endemic to Borneo, are facing a dangerous genetic bottleneck as the various herds become separated from one another in their fragmented habitats.

Poignantly, the elephant with the crooked tusks was discovered when wildlife officials set about relocating a herd from near a large palm oil plantation to another part of Sabah.