Like people across the developed world, most Malaysians take clean water for granted. All they need to do to get it is to turn on a tap somewhere within easy reach. They can also get drinking water bottled with bubbles and myriad flavors. Yet for people living in the poorest communities, especially in remote areas, clean drinking water often remains a luxury.

They are hardly alone. According to the United Nations, nearly 800 million people continue to lack access to clean water worldwide and millions die each year from water-related diseases.

But what if you could simply purify water with a device the size of a postage stamp? Actually, there is already such a device. Scientists at Stanford University in the United States have developed a tiny nanostructured device that kill 99.999% of bacteria in water within a matter of minutes.

The tiny device harnesses the sun’s ultraviolet rays to kill the pathogens. The sun’s rays can do that on their own, but a bottle of water left in the sun might need anything from several hours to two full days to be fully disinfected. And when you are thirsty, you hardly have the luxury of waiting hours, much less days, for a drink of water.

“Our device looks like a little rectangle of black glass,” said Chong Liu, lead author of a report that the researchers published in Nature Nanotechnology, based on their findings. “We just dropped it into the water and put everything under the sun, and the sun did all the work.” 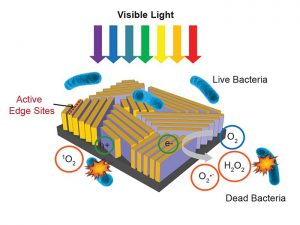 The nanostructured device, is about half the size of a postage stamp and uses sunlight to quickly disinfect water. Photo Credit: Nature Nanotechnology

When viewed under an electron microscope, the surface of the device resembles a fingerprint with a series of closely spaced lines. Those lines are very thin films, which are made of molybdenum disulfide, a cheap and readily available industrial lubricant. These so-called “nanoflakes” are placed on top of a rectangular piece of glass, stacked up on their edges. They form what appears to be the walls of a miniature labyrinth.

“In ordinary life, molybdenum disulfide is an industrial lubricant,” the researchers explain. “But like many materials, it takes on entirely different properties when made in layers just a few atoms thick. In this case it becomes a photocatalyst: When hit by incoming light, many of its electrons leave their usual places, and both the electrons and the ‘holes’ they leave behind are eager to take part in chemical reactions.”

The walls of the molybdenum disulfide have just the right thickness for them to absorb the full range of visible sunlight. They are each topped with a thin layer of copper, which also acts as a catalyst for reactions that produce “reactive oxygen species” like hydrogen peroxide – a commonly used disinfectant that can kill bacteria in water around it. The new device does not require water to be boiled first before it can work its magic, which is an added bonus.

“It’s very exciting to see that by just designing a material you can achieve a good performance,” Liu said. “It really works. Our intention is to solve environmental pollution problems so people can live better.”